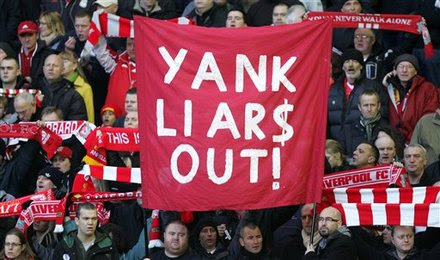 It's been a terrible start for Liverpool in the new English Premier League season. They are currently in the relegation zone, after an embarrassing home loss to newly-promoted Blackpool last weekend.

They have a ton of debts, incurred by their outgoing American owner Tom Hicks. And now comes word that New England Sports Ventures, headed by John Henry and Tom Werner, have made a bid for the historic English club for 300 million pounds ($477 million).

With Liverpool possibly looking at administration if the debts aren't settled soon, it looks like Henry and Co. are going to add another team in red to their family.

The Liverpool fans are extremely upset at Hicks and George Gillett and are very suspicious of another group of Americans taking over the club. Back in 2002, there was plenty of doubters in Boston about Henry's group, and that they really didn't deserve to take over the Red Sox. But they silenced those doubters, bringing two World Series titles to Boston in the 2000s.

So I would suggest the Merseyside fans also give John Henry a chance. Liverpool FC and the Boston Red Sox could be a wonderful match.
Posted by The Omnipotent Q at 9:44 PM