Lowell Rides Off Into The Sunset 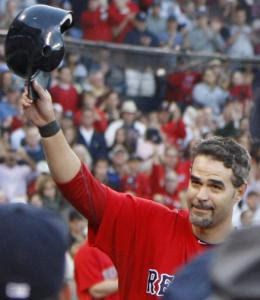 Bill Hall booted a ball in the tenth inning of Game 1 of yesterday's twinbill that gave New York a 6-5 win, but made up for it by hitting a double (that I thought was going out) to center field, also in the tenth, and Eric Patterson singled him in to give the Red Sox a 7-6 win in Game 2.

The second game ended at 1:22 AM, due to two four-hour marathons. (I guess Joe West is laughing somewhere.) Game 1 had to begin after 4 PM because Fox had that game. They had to start the second game right around 9:30 PM.

That's what happens when you sell your soul to television.

But the day really belonged to Mike Lowell, who was honored before the first game. (I wish I could have seen that too, but Fox had the first game of the doubleheader...OK, I'll stop there.) He was given Fenway's third base, among the many gifts he received.

And he doubled in two runs in the first inning, walked in the third, and then singled off the wall, just missing a home run by a few feet, in the fifth. He was then taken out of the game, to thunderous applause. It would be his last at-bat, as Terry Francona said this would be the last game Lowell would play in.

Mike Lowell is all class to the end, and that was on display yesterday.

Enjoy your retirement, Mike. Thanks always for 2007. And bringing some class and dignity to a sport that doesn't always show it sometimes.
Posted by The Omnipotent Q at 12:07 PM