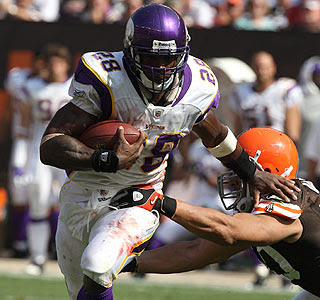 A couple of weeks ago, my friend Chris recommended to me a bar that I might like to check out. It was a gin mill called "Bar None," on Third Avenue in Greenwich Village. Chris knew I was a huge Minnesota Vikings fan, and told me some Vikings hung out there and watched their games together. So with today being the opener of the NFL season, I decided to give the place a try. (I had heard last year there was a place in New York where there were Vikings fans watching the games together, but I had no idea where it was.)

When I turned up Third Avenue with the game in progress (I was delayed by the subway getting in) I heard a big roar, and to my amazement, I saw a jam-packed bar loaded with Vikings fans. The game had just been tied at 3 in the first quarter.

I was stunned to see so many folks decked out in purple in one place, and especially in New York City! It reminded me of the first time I stepped foot in the Riviera Cafe in 2003 and saw so many Red Sox fans in one place. I felt like I had just died and woke up in downtown Minneapolis.

But Bar None is unlike any bar I've ever been to, because the back of the bar is loaded with nothing but New Orleans Saints fans, rooting on their beloved team with a big screen to boot.

Yep, the bar is half-Vikings, half-Saints. It must be something to see when the Vikings play the Saints in that place!

The bar was up and roaring all game. And whenever the Saints scored (and they did a lot against the Lions today) you could hear the wild cheers from the back.

Most of the fans there were Minnesota transplants, as I saw a number of folks with Twins hats, and the accents I could decipher sounded very Midwestern. Most of the fans were wearing the newer Vikings jerseys, while I had on my old timey Cris Carter one. One guy was blowing a horn, and another was wearing a Vikings helmet with horns on it. Every play got some kind of reaction to it.

Most of the fans were in their 20s or 30s, so I would have been one of the older Vikings fans there. Nice to see lots of females there, most of whom were wearing Vikings gear.

Adrian Peterson was a popular choice with the jerseys, and he had one spectacular game today. He rished for 180 yards and scored three TDS, and Percy Harvin scored the other on a pass from Brett Favre. Favre wasn't great, but did just enough to get the Vikes the win over Cleveland, 34-20. They were down 13-10 at halftime, but I wasn't too worried. The Browns don't have a good offense (the lone TD in the first half was a punt returned for a TD), but it was strange rooting against Brady Quinn. He was from Notre Dame, and I like guys named Quinn (for some odd reason).

Peterson ran off a 70-yard TD in the fourth and the bar went bananas. It was a thing of beauty and proved why he is the best offensive player in the NFL. The Vikings ran out the clock (gave up a garbage time TD in the last minute), and in the second half proved why they are a favorite to go to the Super Bowl. They dominated on both sides of the ball, and everyone from Bar None went home happy. (Including the Saints fans, who saw their boys win, 45-28 over Detroit.)

It was quite an afternoon at Bar None. A great spirited crowd having a blast watching their boys win. And now I have a place in New York to watch the Vikings games every week with like-minded souls. I loved every minute of it.

I don't feel so all alone watching them any more. See you next week, guys.

Skol Vikings!
Posted by The Omnipotent Q at 11:19 PM