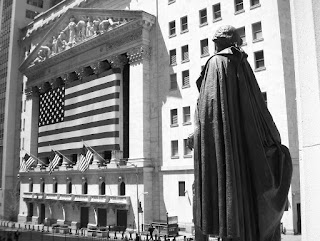 I spent an exhausting day yesterday in my job as a background extra, doing my first commercial on Wall Street, in the shadow of George Washington's statue (pictured). I was down there for nearly 12 hours being part of a commercial for Reuters. I really didn't think it would go on so long, and I wound up missing Notre Dame's 33-30 win over Michigan State. (But it was interesting watching literally hundreds of tourists stopping to watch the shoot, taking pictures of us.)

But I met up with a few friends in the Village last night and watched the Red Sox 11-5 win over the Orioles, the 15th time the Sox have given the O's a beatdown. (And think, it could be 16 if not for that hideous comeback loss back in July.)

At the start it looked like Jon Lester was going to have a rough night, as he gave up hits to the first three hitters he saw and it was already 1-0. But he pitched out of any further trouble, and Josh Reddick belted a two-run shot to right to make it 2-1 in the second.

But Lester allowed solo homers to Ty Wigginton and Melvin Mora, and it was 3-2 in the fourth. But soon enough, the Red Sox realized they were playing the Orioles and put some crooked numbers on the board in the seventh and eighth, which were capped by J.D. Drew's opposite field blast to make it 10-3. Even bench guy Brian Anderson hit a blast to deep center to cap the Sox' scoring.

Manny Delcarmen came in in the ninth and had absolutely nothing, and gave up back-to-back homers and then put the next two on. Terry Francona called on Ramon Ramirez, who is no sure thing either but got a double play with the bases loaded to end the game and give Lester his 14th victory of 2009.

The Orioles' misery against the Red Sox will conclude today at Camden Yards, with Daisuke Matsuzaka getting his second start back after his long stint on the disabled list.
Posted by The Omnipotent Q at 10:39 AM