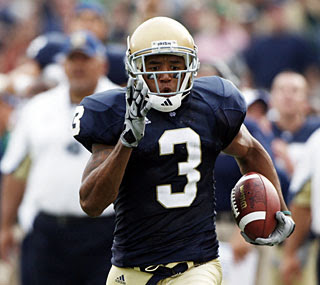 On Saturday, the Red Sox were the Fox Saturday afternoon game, and at the same time, the Notre Dame Fighting Irish opened their 2009 season at South Bend against the University of Nevada on NBC.

So the remote got quite a workout.

It was another rotten day for the Red Sox. Tim Wakefield gave up three quick runs to the White Sox, which began with Paul Konerko's two-RBI single. And didn't get any better after that.

Gavin Floyd was terrific, retiring the first 17 hitters he faced before Nick Green singled to end the perfect game bid. Only Jason Bay's solo home run prevented the Red Sox from getting shutout, 5-1.

Tim Wakefield went six innings, giving up four runs. He was also noticeably limping after the day was completed by him. We'll see tomorrow if that means anything. The only good news in Red Sox Land was that Texas lost to Baltimore, as the Orioles came from behind to win, 5-4, keeping the Red Sox Wild Card lead at 2.

At South Bend, it was all Fighting Irish. They came out storming against Nevada, the first time the two teams have ever played each other. Jimmy Clausen threw four touchdowns, and it was 28-0 Irish by halftime. He threw three TDs to Michael Floyd (pictured) of 24, 70 and 88 yards, and was 15-for-17 for 312 yards. It was a flawlessly played game by ND, and granted it was against a team that's not nationally ranked and the Irish were a heavy favorite.

But they also looked strong on defense, and Nevada has an offense that can score points. It was the first shutout by Notre Dame since they blanked Rutgers, 42-0, in 2002.

Next week the competition gets tougher, as the Irish head up to the Big House to take on Michigan next Saturday. The heat's on Charlie weis to produce a big winner in 2009, and today's win over Nevada was the first step in that becoming a reality.
Posted by The Omnipotent Q at 9:55 PM