The Commander Is Back 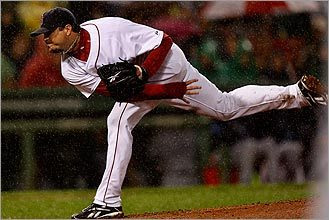 It was 9-1 at Fenway Park, the Red Sox were leading, and the rain really started to pour down. The game had already been delayed two hours before it even began. With two on and two outs, I was practically yelling at the TV screen for Josh Beckett to throw strikes and stop fooling around. It was the top of the fifth, and one more out for an official game.

It had been a frustrating day earlier, watching Notre Dame blow a three-point lead to Michigan, thanks to Charlie Weis' dubious play calling with three minutes to go. (You run the ball Charlie, to make Michigan use their timeouts!) A Red Sox win in a crucial game would surely improve my night. But I worried that even harder rain might stop the game and cost the Red Sox an easy win, even with just one out to go.

He got Carl Crawford to line out to center, and I could breathe a little easier. Once the game reached the top of the sixth, Evan Longoria slipped off second base after a double, and the umps knew right then to roll the tarp on the field.

And that was the end of the night. About an hour later, the umps called the game, a 9-1 Red Sox win. The Josh beckett of earlier 2009 was back, allowing just the one run in the fifth. The Sox backed him up with eight runs off rookie Wade Davis in the third, with Alex Gonzalez starting the rally with a single, and capping it with a three-run double. He has been some revelation since his return from Cincinnati, especially at the plate.

Today is a big day for the Red Sox, as they have a day/night doubleheader with Tampa Bay, who basically look like they are bagging the rest of this season, having lost nine straight. Texas, who lost last night in the rain to Seattle at Arlington, play the Mariners in a doubleheader. The Rangers are now 3 back of the Sox in the Wild Card chase.

The Red Sox send Clay Buchholz to the hill in Game 1 at noon, and Jon Lester up there for Game 2 at 5 PM. I'll be checking my cell for updates as I watch the Vikings season begin in Cleveland at 1 PM today.
Posted by The Omnipotent Q at 11:40 AM