Six Out of Seven 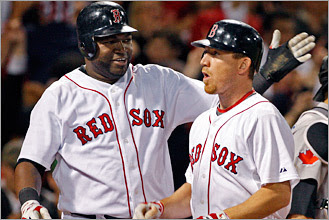 The Red Sox staged a thrilling comeback in the eighth inning tonight, but it fell short, as Toronto held on to an 8-7 win at Fenway on Tuesday night.

Clay Buchholz was throwing grapefruits at the Jays, allowing a staggering 5 home runs in 5 innings. He looked like a staff ace the last few weeks, but really got whacked last night.

It was 8-2 in the eighth, and the Sox put five on the board, including a J.D. Drew three-run home run. The Sox threatened in the ninth, but Kevin Youkilis struck out to end the game with two on. But it was amazing that on a night when the Sox gave up six home runs (three to Adam Lind) and hit into four double plays, they still had a great chance to pull the game out on the last pitch.

But the night ended with the L.A. Angels once again doing the Red Sox a favor by beating Texas, 5-2, to put the Red Sox officially in the postseason. No matter how it happened, they are there. No on-field celebrations? Who cares. Now Terry Francona can officially plan for next week, when the Red Sox will travel to Anaheim to open the ALDS at Angel Stadium.

The Red Sox have now made the playoffs six of the last seven years, the lone exception being 2006. It's a pretty impressive accomplishment by Terry Francona, Theo Epstein and the entire Red Sox organization.

My hats off to them.

And Corky Siemaszko can go screw himself.
Posted by The Omnipotent Q at 1:38 AM

Yay! More baseball in October.
This is getting to be a habit I like.
I must confess though, I would like to see us swinging the bats a little better at this point. And we really don't need to be spotting anybody 4 and 5 run leads in the playoffs like we've been doing.
Yet I remain optimistic that we'll do just what needs to be done and continue our domination of the Halos next week.

Also - once again your words to live by are uncannily relevant. Almost spooky.
2nd time in 3 weeks.
How do you do that?

I don't know how I do it, SoSock. Maybe somebody is leading me???

I love that October baseball. Sox are getting some bad baseball out of their system. I'm sure they'll be fine when the bell rings next week.

I was pulling for the Angels hard last night. Thanks Halos.

See you for the playoffs, Rick...