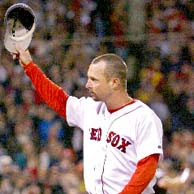 A truly embarrassing three-game sweep by the Toronto Blue Jays was completed tonight, 12-0, as they pounded the Red Sox "B" team. I know that since the Red Sox have wrapped up the postseason berth, it means almost nothing.

But boy, it was simply awful to watch the last three nights.

Manny Delcarmen shouldn't be anywhere near a postseason roster. He gave up two more runs in one inning of garbage time relief. Ugh. I'd rather see Paul Byrd on the roster, as a long relief man.

When was the last time you saw a playoff-bound team put a position player in to pitch? Catcher Dusty Brown pitched the ninth and didn't look too bad, allowing one run. (He sure looked better than Delcarmen.)

And boy, was it painful to watch Tim Wakefield go three innings tonight. He was moving very painfully it seemed, but Wake tried to go out there and make a go of it. I would bet now that he will not be on the ALDS roster. Really sad to see, but I'd bet he'd be the first to say it.

And it also makes me wonder if tonight was indeed the last time he will ever take the mound, and that he will call it quits after the season.

He's been a classy gentleman and one of the best men ever to wear a Boston Red Sox uniform. Whatever he decides, I have to say this:

Thanks Wake. For everything.
Posted by The Omnipotent Q at 9:45 PM

I'm such a girl, your post totally made me tear up. I love Wake. I'll miss him when he's gone..

Q, that picture is worth a thousand owrds. Great post. Allison, you don't have to be a girl to tear up. Just look at me!

The Bronx Bombers always had a hard time with Wake...We will miss him dearly.

I'll miss him too, Allison, when Tim calls it a career. Baseball needs all the Tim Wakefields it can get.