Sox Win In The Dome, As Few Care 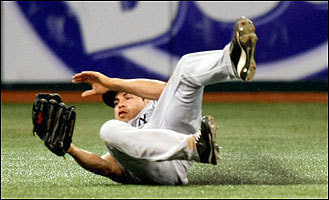 In front of a half-filled Tropicana Dome last night (and that's a disgrace considering how important this series is for the Rays), many of whom were Red Sox fans, Jon Lester pitched six solid innings and Jacoby Ellsbury made two spectacular catches as the Red Sox opened a seven-game road trip with an 8-4 win.

The Red Sox had their hot bats on display as Kevin Youkilis, Jason Bay and J.D. Drew all went deep to give the Red Sox their 11th win in 14 games, and just their third win in 14 games at Tampa Bay. The Sox hit Andy Sonnanstine, who had just been promoted from AAA, early and often, and the Red Sox eventually built up a 7-2 lead for Lester. Jon also set the a new all-time record for strikeouts for a Red Sox lefty, eclipsing Bruce Hurst's 1987 record of 190.

Lester left after six with slightly tweeked groin, and the Red Sox emphasized after the game it was nothing to worry about. Billy Wagner came in in the seventh and was again terrific, striking out 2 of the 3 hitters he faced.

But Hideki Okajima was again less than terrific. He allowed all five batters he faced to reach base, which cost the Sox two runs. On came Jonathan Papelbon with no outs and the bases loaded. He got a strike out, and then Jason bartlett hit a ball that looked like it drop in center for a hit and two runs. But Ellsbury made the second of his tremendous catches, and Pat Burrell inexplicably stayed at third. Pap then got Carl Crawford on a fly to left to end the threat.

Papelbon pitched two innings last night for the save, his 33rd of the year. Texas won a doubleheader over Toronto last night, so the Red Sox are now 3 1/2 games up on them in the Wild Card race. Tampa Bay continues their fade out of the playoffs, and now trail the Red Sox by six.
Posted by The Omnipotent Q at 11:34 AM