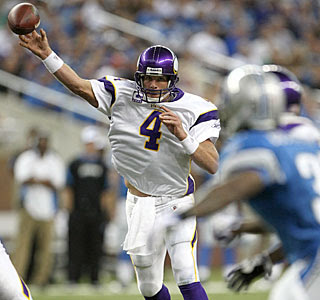 I didn't see the Vikings game on Sunday, as I was wiped out from working all day on Saturday, so I stayed in and took in the Patriots-Jets game and the Red Sox sweep in Baltimore. So it was an old fashioned day of checking updates on other channels for the Vikings-Lions game in Detroit.

Almost every update in the first half had the Lions ahead. That's not a good thing, and I wasn't taking the Lions, who hadn't won a game since 2007, for granted.

It was 10-7 Detroit at halftime, but I thought of last week's win in Cleveland, where the Vikings were also behind at the half against an inferior opponent, and came roaring back in the second half and won easily.

And that's exactly what happened yesterday.

It was a fine day for Brett Favre, who on the first snap of the game set a new NFL record for consecutive games played, breaking legendary Vikings defensive end Jim Marshall's record of 270. Favre went 23-for-27 for 155 yards and two TDs. He hit Visanthe Shiancoe with one TD in the second quarter, and Percy Harvin with another in the fourth to put the game away.

The Vikings took control in the third quarter, tying the game on a Ryan Longwell field goal, and shortly after that a 27-yard TD run by Adrian Peterson. He rushed for a total of 92 yards on 15 carries.

It was also a big day for LB Chad Greenway, two picked off two passes from rookie Matthew Stafford and also recovered a fumble.

The Vikings are now 2-0, and will have their home opener in the Metrodome next Sunday against the 2-0 San Francisco 49ers.
Posted by The Omnipotent Q at 11:18 AM