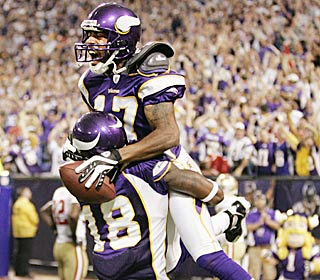 It looked for all the world like the San Francisco 49ers were going to upset the Vikings in their home opener at the Metrodome.

That is, until the Ghost of Comebacks Past made an appearance in the final 1:29 of the game.

Brett Favre and the Vikes were 80 yards and no timeouts from the end zone with the Vikings down, 24-20. Vikings had reviled Favre in the past for pulling off comebacks against the Vikings in the past, and now it was time to see if he could find that old magic in his bag of tricks.

With just under two minutes to play, the Vikings were stopped near their 30 yard line, and it looked the Niners would walk away with the upset win. But a very fortunate thing was in the Vikings favor: they had all three timeouts left. They used them all, stopped Frisco cold and got the ball back.

Favre got the Vikings down to the 32 with 12 seconds remaining. I was at Bar None in Greenwich Village and the packed house was roaring on every play. Favre heaved a desperation pass to the end zone, and I thought it was going out of the end zone. But little-used Greg Lewis snared it, kept his back foot just inches inside the back line and got the other foot down. The bar roared as one, but I didn't get excited until the referee signalled touchdown. It was reviewed and confirmed as a Vikings TD.

The Vikings literally grabbed victory from the jaws of defeat on a day when they mostly outplayed the Niners. SF blocked a FG at the buzzer of halftime and returned it for a TD to graba 14-13 lead. No problem, I thought. The Vikings were losing at the half in their two previous games, and they should come back in this one.

But they looked mostly flat in the second half. Adrian Peterson was basically shut down going into the final drive, and the only Vikings score was Percy Harvin's kickoff return for a TD in third.

The Vikings are now 3-0, and Favre became the first Viking QB to throw for at least 300 yards in a game since Daunte Culpepper did it in 2005.

And next week is a big one for Favre: he goes up against his old buddies from Green Bay next Monday night at the Metrodome.
Posted by The Omnipotent Q at 11:34 PM