A Pitcher With A Lot To Prove 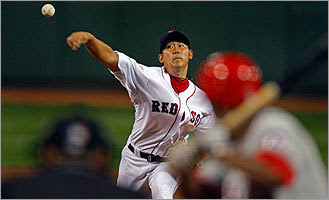 It was probably the biggest start of Daisuke Matsuzaka's career, other than his two big postseason starts in 2007. And, lo and behold, he brought his "A" game to the table.

Most Red Sox fans were probably praying for five innings and the score to be relatively close against the Angels. It's been a lost year for Daisuke, and many fans were beginning to sour on him, that he might have just been some shooting star who had finally crashed to earth.

No one, and I mean no one, could have predicted six shutout innings against the playoff-bound Angels and John Lackey. Dice-K didn't allow his first hit until the fifth inning, and was never really in any trouble. He walked Chone Figgins twice, but he allowed just three hits and one other walk. He struck out five. It was a splendid performance by a pitcher who had a lot to prove since getting booed off the mound in his last Fenway start in June.

David Ortiz hit his 24th home run in the eighth, setting a new record for designated hitters, his 270th dinger of his career, breaking Frank Thomas' all-time record. The Sox went out there last night without Kevin Youkilis, who had back spasms, and Victor Martinez, who was back in Cleveland attending to a family matter. (Both figure to be out again tonight, but should be back and available on Thursday.)

The Sox scored two in the sixth, and added insurance in the eighth. The bullpen was terrific again, with Jonathan Papelbon allowing just a run with two outs in the ninth. It was the sixth straight win for the Red Sox, and just Daisuke's second win of the season.

It was a great night for the Sox, as the Texas Rangers continue their plummet, as they were beaten by the Oakland A's again, 6-1, at home, so the Red Sox lead in the Wild Card is now at 5 1/2 games. The Red Sox' Magic Number to wrap up a playoff berth now stands at 13. (And I have now put up the official countdown on the right side of this blog.)

New York lost at home in a game that featured a brawl with the Blue Jays, so their lead in the AL East is now at 6 1/2 games. No, they haven't wrapped up anything yet. (And the Red Sox will open and close the 2010 season against New York as well, and both at Fenway Park. Bet your bottom dollar the opener will be hijacked by ESPN for a Sunday night game. I'm cold just thinking about it.)

Paul Byrd takes the mound tonight against Joe Saunders as the Sox try to extend their winning streak to 7 games.
Posted by The Omnipotent Q at 10:47 AM

I was bummed that the NL West was playing the AL East but the Padres aren't playing the Yanks or Sox.

A shame, Ken. Would love to have come out for another Red Sox-Padres series in 2010. I may just come out anyway...