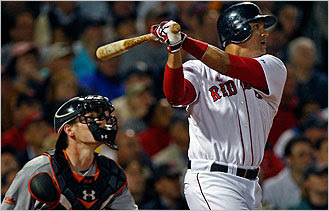 Paul Byrd took the mound at Fenway Park on Wednesday night, looking to better acquit himself after the really lousy start he had in Chicago on Friday night. And he certainly made amends, going five innings against the Orioles and allowing just two runs.

He left with a 3-2 lead, but the bullpen couldn't hold it. Manny Delcarmen came in in the sixth and promptly walked in a run after loading the bases. And Ramon Ramirez gave up a hit on the first pitch he threw with the bases loaded and one out to give Baltimore the lead.

But Ramirez bounced back, striking out the next two hitters, including the ever-dangerous Nick Markakis.

The Red Sox promptly tied the score in the bottom of the inning, and got the lead back on pinch-hitter Victor Martinez' bases loaded-double to put the Sox up, 7-4.

Billy Wagner and Daniel Bard pitched 1 2/3 solid, scoreless innings (Wagner was really impressive, striking out two), and Joanthan Papelbon got the final four outs for his 34th save to wrap up a two-game sweep of the O's, 7-5.

This was a game the Sox badly needed, as Texas completed a sweep in Cleveland, 10-0, and this stay two games back of the Red Sox. The Sox are off on Thursday. Tampa Bay, who just got swept in New York and are seeing their playoff hopes go down the trash chute, come to Fenway starting Friday night for a three-game series.
Posted by The Omnipotent Q at 12:11 AM