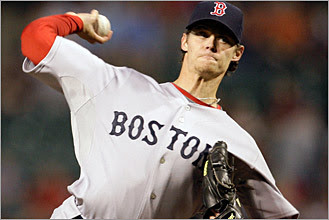 Clay Buchholz pitched six sharp innings against the Orioles on Friday night in getting his sixth win of the year as the Red Sox got back to their winning ways and opened the series at Camden Yards with a 3-1 win.

Buchholz allowed just a Luke Scott solo home run and scattered five hits in striking out three. The bullpen was even sharper, as the combination of Daniel Bard, Hideki Okajima and Jonathan Papelbon allowed only one baserunner in three innings, that being a Bard walk in the seventh.

Papelbon got his 37th save of the season.

Jason Bay got his 34th home run of the season, but left the game shortly afterwards left because he was showing flu-like symptoms. (These days you're lot more careful with that sort of thing.)

Buchholz' performance tonight was the 11th straight start where Red Sox starters have allowed three or fewer runs in a start. Over the last eight games they are 5-0 with a 1.72 ERA.

The Red Sox win combined with Texas' loss to the Angels drops the Red Sox Magic Number to 9, and their Wild Card lead goes to an ever-widening 7 games.
Posted by The Omnipotent Q at 11:04 PM