You Call That a Brawl? 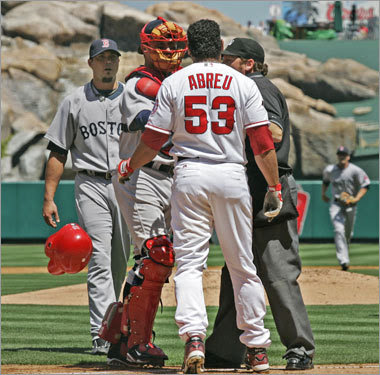 Well, all that goodwill from Friday night seemed to be a thing of the past in the first inning of yesterday's Red Sox-Angels game.

Josh Beckett took exception to Bobby Abreu calling time out just before a pitch was about to be thrown, and Beckett launched one that came very close to Abreu's noggin. The replays clearly shown that Beckett was taking way too long staring out at Chone Figgins leading off second and Abreu asked for time and got it. This set off both benches, and there was a lot of yelling and posturing, but no punches were thrown. (I saw a few media outlets call it a "brawl." How could it be a brawl if no punches were thrown?)

Mike Scioscia, Mickey Hatcher, Justin Speier and Torii Hunter were tossed from the game, all for running their mouths off at the umps. Overall it wasn't a good day for Beckett, as he allowed 4 runs in 6 innings, but it was even worse for the Red Sox offense.

It looked promising early, as Kevin Youkilis and J. D. Drew went deep in the second. But L.A. came back to score three. But the Sox squandered way too many opportunities, as they had the bases loaded in the eighth with one out and didn't score. Vladimir Guerrero went deep off Hideki Okajima (who continues to be less than stellar so far) to make it 5-3 in the 8th. But the Red Sox made it 5-4 in the ninth on David Ortiz' single. And with two on and two out, J.D. Drew looked at a call third strike to end it, and a second straight series loss.

I saw in today's Globe that the Red Sox are an astounding 3-fo-30 with two or more runners on base in the first six games so far. Yikes. The clutch hitting just isn't there so far.

Now it's off to Oakland for three games with the A's, and a reunion with an old friend named Nomar, who the Red Sox haven't seen since July 31, 2004.
Posted by The Omnipotent Q at 11:47 AM