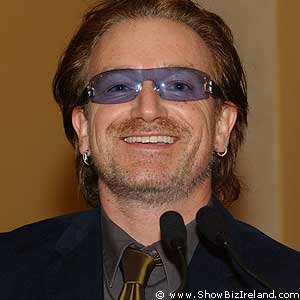 This Tuesday night for our special category we will have "Celebrity Real Names Trivia." I will give the real name of a current celebrity (no dead ones), and also a clue as to what they do (the field they gained their fame), and you will tell the star's name.

The picture is of one Paul Hewson, aka Bono. And as you might have guessed, said lead singer of U2 will not be one of the seven real names in this week's quiz.

This week's Sneak Peek question is: "In what film does Sonny and Cher's song 'I Got You Babe' play on the soundtrack nine separate times?"

We will get going around 9 PM, as there will be a Red Sox game against the Indians going on at the same time. (Have I mentioned they've won 10 straight and swept the Yankees this past weekend?) So I hope many of you can come out and brave the gorgeous weather and join us.
Posted by The Omnipotent Q at 12:36 PM

MattySox said...
This comment has been removed by a blog administrator.
9:19 PM

Please don't leave any answers to the Sneak Peek question here, folks. Thanks.