This MVP Can Handle The Fastball Inside 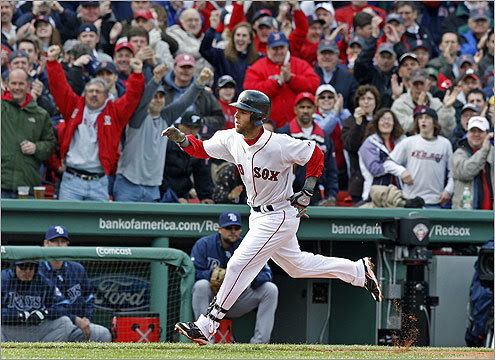 So much for that jackass on the MLB 2009 The Show commercial who says Dustin Pedroia can't hit the inside fastball.

Dustin made Kevin Whatshisname, their Director of Accuracy or whatever he calls himself, eat his words in the first inning yesterday as he took Little Game James Shields into the Monster seats with an inside fastball to get the 2009 season off with a bang and a 1-0 Red Sox lead.

From there Josh Beckett took over and showed them what a real "Big Game" pitcher is. He struck out two of the first three hitters he faced, and only ran into any problems twice. Tampa Bay loaded the bases in the third but scored only one, and had second and the third in the sixth with no outs and did not score. Commander Kick Ass allowed just two hits, struck out ten, walked three and threw just 93 pitches in getting his first ever win on Opening Day.

Jason Varitek also went deep for the Red Sox, and ball hit right down the line just inside the Pesky Pole. The Red Sox scored three in third off Shields on RBIs by J.D. Drew, Jason Bay and Mike Lowell to make it 4-1.

Hideki Okajima put two runners on in the eighth who eventually came around to score to make it 5-3. Jonathan Papelbon came on in the ninth to shut down the defending AL champions which included two strikeouts to end the first Red Sox win of 2009.

The huge crowd at Professor Thom's enjoyed just about every minute of it. It was good to be with so many friends who were glad to have regular season baseball back again. I couldn't be at Fenway yesterday, but I was at the next best place I could be at. And the Red Sox getting 2009 off to a flying start made the day even more special.
Posted by The Omnipotent Q at 10:55 AM