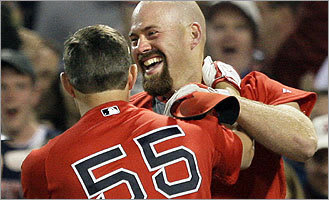 It was a night of pure frustration. It looked like it was going to be one of those nights were I wouldn't get much sleep going into tomorrow. The Red Sox were leaving runners everywhere (13 left on base), banged into four double plays to kill rallies (and J.D. Drew turned the trick twice). They had Yankee villain Joba Chamberlain on the ropes all night, and The Nebraska Drunk Driver kept finding ways to escape (mostly on groundballs hit right at infielders who turned it into two outs).

They drove Chamberlain out of the game in the sixth, but he wound up getting just a no-decision. By the eighth it was 4-2 with Mariano Rivera on and he struck out Dustin Pedroia with two on to send the game to the ninth, and it felt like doom was on the way.

When the Sox came up in the bottom of the ninth, I said to my pal Eric at Professor Thom's something I had said to him on a few occasions before with Rivera in the game and it seemed to work: "He's not infallible. We beat him before, and we can beat him again." I had said this first back in 2004 when we were together at the Riviera Cafe, and the Sox staged a great ninth inning comeback in September of 2004. I've done it a few times since, and it had worked (but not every time of course). So I said it again as the inning started, and with two outs, a man on and Jason Bay coming up, Eric asked me to say it again. I did, and Eric said it would be something if Bay put one into the Monster seats. And lo and behold...

BAM! Bay hit a blast to center field that made it to the first row of seats to tie the game, and hang the 12th blown save that Rivera has committed against the Sox in his career. The walls at Professor Thom's shook with the biggest celebration of the 2009 season so far.

The game went to the bottom of the 11th, with Yankee lefty punching bag Damaso Marte (he of the 18.00+ ERA so far in 2009) in the game, and you could just sense something big was going to happen. Kevin Youkilis stepped to the plate. And lo and behold...

BAM! A rocket off Youk's bat sailed into the Boston night and the Red Sox had a simply thrilling 5-4, 11-inning win over their hated rivals. The bar shook once again, with friends and strangers jumping on me. It felt so good to let it all out again after a night of extreme frustration.

The Red Sox take the first of 18 games between the teams this season. Chamberlain was terrible, and Youk wound up the hero. The Red Sox have now won eight straight.

Score one for the good guys.
Posted by The Omnipotent Q at 1:44 AM

Wow-what do these teams do for an encore?

For the Sox, keep the winning streak going!

About that encore-mission accomplished. Coors Field on the Back Bay.