At First Glance, I Thought He Was Out 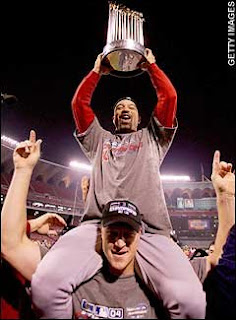 It was terrific to see Dave Roberts throw out the first pitch at Fenway Park last night before the second game of the doubleheader. And it was a pleasure to see him with Don and Jerry during the third inning of the game.

Dave will be an icon in Boston and among Red Sox fans forever. And he doesn't seem to mind at all. (See the current quote at the top of this blog.)

And at the moment it happened, I thought Dave Roberts was out.

I had a candle burning in my living room with my St. Therese medal out and I was praying for a miracle. It was the only game I was home for in the 2004 postseason. (I spent 12 of the 14 games at the Riviera Cafe in the West Village among a slew of Red Sox supporters, and the other at my buddy Matt's place.) Everyone on earth knew Roberts would be attempting to steal second. Jorge Posada's throw was very good, but until I saw Joe West signal safe, I thought he was cooked. I was ready to yell out a colorful epithet until I saw his call. It was like a reprieve from the governor. And none of us could imagine where it would ultimately lead to: Dave carrying the 2004 World Series trophy on top of Mike Timlin's shoulders (pictured) in St. Louis ten days later.

(And whenever I see the film "Major League" when Willie Mays Hayes steals second in the ninth, I can't help think of the real "Steal." Willie makes it by an eyelash, and the Yankee shortstop is even wearing number 2. And that was filmed 16 years before the swipe.)

My pals at Surviving Grady have a terrific post about Dave Roberts on their site today.

Dave Roberts is now in retirement, and I am not surprised his next career is in the media. He's done some work with the Padres pregame show, and will be working with the MLB Network this summer. And he may even be doing some work with NESN as well.

Well Dave Roberts and any member of the 25 will never pay for anything in Boston again.

Dave saying he never got tired of hearing thank you for The Steal reminds me of Jimmy Buffet. Jimmy was asked years ago if he ever got tired playing "Margaritaville."

I am paraphrasing Jimmy response. It was something like "No, Margaritaville has paid for my house, a few boats and a plane. Why would I ever get tired of playing it?"

It made Dave's name, it made Jimmy's name. Never bite the hand that feeds you...