Double Your Pleasure, Day and Night 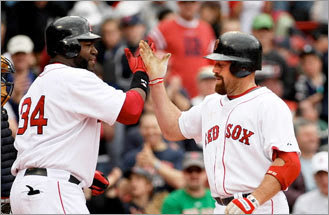 The rain created all kinds of havoc this week in Boston, as the Red Sox were forced to play a day/night doubleheader on Wednesday against the Twins, one beginning at 12:30 PM and the other at the normal time of 7:05 PM.

The Sox came out flying, as they blasted Scott (Home Run) Baker for three straight two-run shots in the first, second and third innings. Kevin Youkilis, Nick Green and Mike Lowell all provided the firepower, with Green's the furthest shot, going across Lansdowne Street. (It's a good thing Green's hitting well, as he's starting to pile up the errors. He made three in the doubleheader.) It was 6-0, and then the wet stuff started falling, and by the seventh inning it was 10-1. The Sox were pouring it on and the skies were pouring down. The tarp rolled on the field and a short time later the first game was called, and the Sox had the win. Tim Wakefield was credited with a second straight complete game, as he went all seven innings. He once again spared the pen, as Wake continues to prove he is The Man.

By 7 PM, it was raining again, and it looked like Game 2 would not be played at all. But after a 47-minute delay, the game was able to get going. And fortunately, for the Sox, it did.

Jeff Bailey, who was just called up with Rocco Baldelli's hamstring injury, played first in the nightcap, and on his first at-bat of 2009, took Francisco Liriano deep into the Monster seats to make it 3-0 Sox. Bailey had a terrific spring and it's great to see him back in Boston. (He had already hit 4 HRs at Pawtucket.) The Red Sox added two more in the third, and eventually wound up chasing Liriano after he gave up a total of 7 after four innings. Brad Penny allowed three runs in six innings, and was definitely sharper than his last time out. It was all over but the shouting for Minnesota, as the Red Sox went on to a comfortable 7-3 win, on Terry Francona's 50th birthday. (It was funny seeing David Ortiz talking about Tito's birthday on tape from NESN: "I thought he was 70," he kidded.)

It was an historic doubleheader, as Don Orsillo said it was the first time since July 4, 1913 that a doubleheader's first game was shortened by rain, and that the nightcap was completed in nine innings. (I'm still trying to figure that out. Since they didn't play night games back then, I can only guess the first game back then was played in the AM, and they waited around for a window to play Game 2 in the PM, and got lucky.)

The Red Sox also wore green uniforms in the second game, and my first thought was "It's not St. Patrick's Day" and then "The Celtics aren't playing today." Then I remembered that April 22nd is Earth Day. (But for me, April 22nd will always be the day Tom Seaver struck out 19 San Diego Padres to tie the then-record in 1970.)

The Red Sox have now won seven straight, are now in second place, and have Thursday off, and the You Know Whos come to town for a three-game weekend series, with Jon Lester opening the series against That Crazy Drunk Driver From Nebraska Who's Knows He's Much Taller Than Yogi Berra.
Posted by The Omnipotent Q at 12:30 AM

And Tom Terrific Struck out 10 In a row, which no pitcher has ever equalled:

By The Way, Gabbard was traded back to the Red Sox, for cash, straight up.