Wake to the Rescue, Once Again 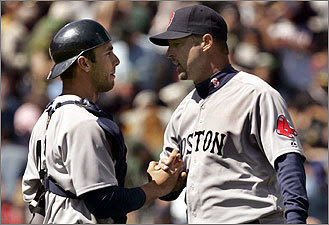 Tim Wakefield pitched one of the best games of his career yesterday, going 7 1/3 hitless innings before it was broken up by a clean single by Kurt Suzuki in the eighth.

A no-hitter would have been something special, but Wakefield put the Red Sox back in the win column, something the team, as well as the fans, needed as the Red Sox pounded Oakland, 8-2.

Mike Lowell and J.D. Drew both went deep, and it was 2-0 going into the 8th. The Sox put it away with six runs, all with two outs. Nick Green sparkled in the field, making two terrific plays that kept the no-hitter going.The failures in clutch that have haunted the Sox this season seemed to be a thing of the past as everyone concerned seemed to let out a sigh of relief.

But the star of yesterday was of course, Wakefield. He told Terry Francona before the game, "I just want you to know whatever happens, don't take me out. Let me keep going," in reference to a bullpen that had been worn out over the two previous games. Wake was going to have to give the Red Sox some innings yesterday, and boy did he ever. He was perfect for the first six innings until Mike Lowell's error ended the perfect game bid. Wake tired in the last two innings, allowing two runs on four hits, but stayed around to complete the job.

He was so economical yesterday, allowing just 39 pitches into the sixth inning. He wound up throwing 111 pitches, but gave the pen a much needed day off.

Once again, it was Tim Wakefield to the rescue for the Red Sox. He's the consummate team player, doing whatever the team needs. From becoming a closer, to taking a beating in Game 3 of the 2004 ALCS to help out the bullpen. Tim Wakefield continues to be one of the classiest guys to ever wear a baseball uniform.

Every Red Sox fan should always thank Dan Duquette for rescuing Wake from the scrap heap in 1995 and bringing him to the Red Sox.

Thanks Duke. And more importantly, thanks Wake. We needed that yesterday.
Posted by The Omnipotent Q at 10:53 AM

Q, It's The "Tao of Wake" Pitchers can be an interesting and frustrating lot. Knuckleballers increases the anxiety a lot more.

Wake increases those queasy feelings because his outings can be so extreme.

It is rare that I have seen a pitcher look so amazing and so horrible in places.

But I suppose we would not have it any other way.

I'm always a bit nervous when Wake takes the hill. He's either got it or he doesn't...