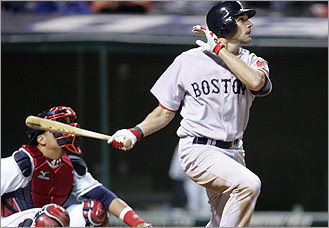 I had a sneaky feeling when Jonathan Van Every stepped into the batter's box in the tenth inning last night in a 5-5 tie game. "Wouldn't this be a great time for him to hit his first major league home run?"

And sure enough, Van Every hit a towering blast off Jensen Lewis into the trees in dead center, and the Red Sox came all the way back from a 5-0 deficit to win the series from the Cleveland Indians, 6-5.

JVE made two sparkling plays in right field, including a diving catch in foul territory. He was getting the start as J.D. Drew was back on the bench with the usual muscle strain. Van Every also had a key hit in the eighth that made the score 5-3, an inning where the Sox scored three and tied the game.

The Red Sox could do little again the Indians' Fausto Carmona for the first five innings, but finally got two in the sixth, on RBI doubles by Jason Bay and Mike Lowell.

Jon Lester struggled again, but like last season, he's off to a slow start. He allowed two home runs and five runs in six innings. He was behind hitters almost the entire night.

The bullpen picked him up, but they had their moments too. Manny Delcarmen loaded the bases in the 8th after getting two outs, but got Grady Sizemore to line out to Van Every. Hideki Okajima walked two in the 9th but got a called third strike to send the game to extra innings. Jonathan Papelbon continued to send the pulse racing, as the Indians got the tying run to second before striking out Sizemore to end it.

The Sox now head to St. Pete to play the struggling Rays, with Josh Beckett taking the hill tonight.
Posted by The Omnipotent Q at 11:51 AM