We Have Another Winner! 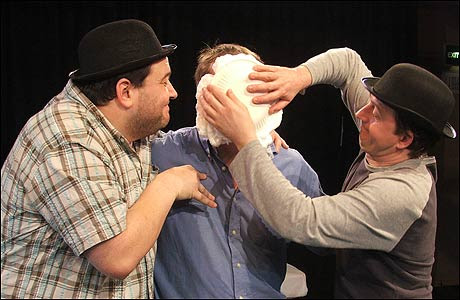 Well, once again, I told you so.

Kendry Morales now has company in the I Got Hurt In Dumb Celebrations department.

Unnecessary celebrating was going to get someone else hurt, as I wrote this past Saturday night.

But I wouldn't have guessed this to be honest. And it's another bad injury that should never have happened.

Chris Coghlan of the Florida Marlins tore a meniscus in his knee while he was delivering a pie to the face of Marlins teammate Wes Helms after Helms won the game in the bottom of the 11th with a single against the Braves on Sunday. He might actually need surgery on the knee.

Unbelievable. I can see it on Coghlan's history now:

He went on the DL in July 2010 because of a knee injury delivering a pie to the face of a teammate.

And of course, nobody will learn anything from this.

OK, who'll be third with the next celebrating injury of 2010? Take your bets now.
Posted by The Omnipotent Q at 10:39 AM