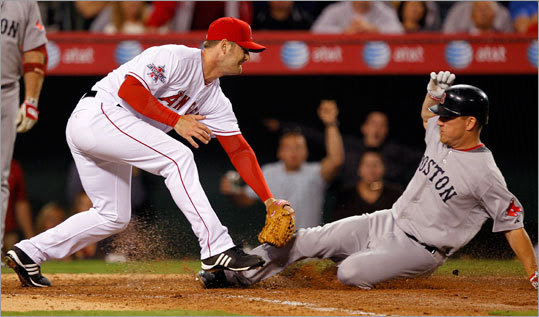 David Ortiz banged two home runs as the Red Sox put the bitter taste of the last two games out of their mouths with a 6-3 win over the Angels in Anaheim last night.

On a night when the Sox were facing the newly-acquired Angel pitcher Dan Haren, a win by the Sox was extremely important, especially with their two main rivals having already won. Kevin Youkilis actually knocked Haren out of the game in the fifth, hitting a line drive off his pitching arm with the Red Sox up, 2-1.

Papi now has 21 dingers on the season, and the second one you can blame squarely on Mike Scioscia. Papi had gone deep earlier in the game, and with the Red Sox up 2-1 in the 8th, Kevin Youkilis stole second. Ortiz hit a ball to right that was just missed being a home run, missing the pole in right by just a few feet. You've got an open base, why are you pitching to him? (I know that Adrian Beltre was on deck, so it was a "pick your poison" moment.) Papi then blasted a two-run shot off Fernando Rodney to expand their lead, one they would really need.

Scott Atchison took over after Clay Buchholz pitched seven strong innings, allowing just one run. But Atchison, who has been pretty good over the last month, gave up a two-run shot to Hideki Matsui to make it 4-3. Uh no, here we go again with the Bullpen Arson Squad.

Jonathan Papelbon came in with two out to get the final out of the 8th. The Red Sox added two runs in the ninth, as J.D. Drew hit a ball off the top of the right field fence with two on, making it 6-3. (Drew was also safe on a wild pitch at the plate, but another of MLB's incompetent umps, Wally Bell, called him out. He had a clear view of the play as well. Bell also called a miserable game behind the plate as well.)

Pap got the Angels in the ninth, just allowing one hit, for his 23rd save, to get a crucial win last night. New York and Tampa Bay both won, so the Red Sox remain 8 back in the East, and 5 back in the Wild Card.
Posted by The Omnipotent Q at 10:23 AM