The Delusion of Yankee Propaganda 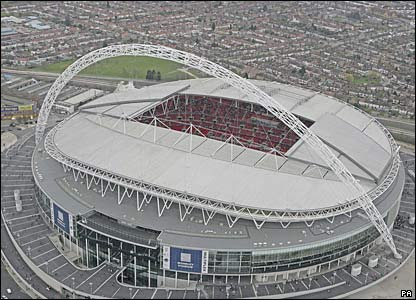 My friend Jere mentioned on his blog today that he heard a commercial on the radio that featured everyone's least favorite announcer, John Sterling. And in it, Sterling called the current Yankee Stadium, "The World's Most Famous Ballpark."

Uh, excuse me, John. But the current ballpark the New York Yankees play in is the third Yankee Stadium, and it was constructed in 2009. It is a completely different entity from the other two the Yankees played in in their history. It has been around for little over one year.

And talk about delusional. Even the old Yankee Stadiums were not even close to the "World Most Famous Ballpark." Once again, the Yankees have never heard of a sport called soccer. I'm sure I'll get all different choices are to what REALLY is the world's most famous ballpark, but you can make strong cases for Wembley Stadium (pictured) and Old Trafford in England, and Maracana Stadium in Brazil. And a few others in places like Italy, Spain and Germany as well. The world worships at the altar of soccer, and you'll see that tomorrow when the entire world (over 1 billion folks at least) tune in as the sport crowns a new world champion.

I've talked about this Yankee propaganda before. This crap they peddle that they are the greatest in the world (I'm not talking about winning World Series), that the entire world worships at their door. Most of the world doesn't pay attention to baseball. Millions around the world do, but baseball just doesn't compare to soccer on a worldwide basis.

And you can't call a park that been around little more than one year even "America's Most Famous Ballpark." The Yankees currently don't play in the Yankee Stadium that Babe Ruth and Mickey Mantle played in. This current ballpark is a completely different entity that just happens to have the same name. The award for the current "America's Most Famous Ballpark" probably goes to either Fenway Park or Wrigley Field.

It never ceases to amaze me just how egomaniacal the Yankees can be when they think the whole world revolves around them. Just makes it that much easier to dislike them.
Posted by The Omnipotent Q at 12:42 PM

This summer, Kevin Youkilis Hits for Kids has teamed up with one of our partner charities, Christopher's Haven, and Rounder Records to put together a fantastic CD. Entitled 'Music Hits Home,' this CD includes tracks from Dave Matthews Band, The Allman Brothers, Phish and many more. The CD will be released on July 16th and Kevin will be doing an in store signing of all purchased CDs at the Faneuil Hall Newbury Comics location from 10:00am until Noon. Click here for more info. http://bit.ly/bJ8qOG

Thank you for alerting me about the CD, Mike. I'm sure the in-store will be a big success!