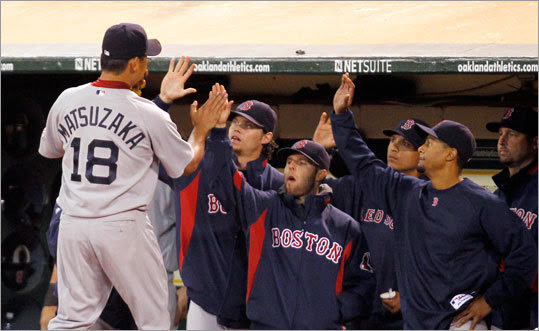 The Red Sox opened their important 10-game journey out west with a 2-1 win in Oakland last night.

Daisuke Matsuzaka pitched, and like the proverbial box of chocolates, you never know what you're going to get. It was the Good Dice-K who was on display last night, the one the Red Sox were hoping would be the good return on their huge investment.

He went 6 2/3 innings, allowed just 2 hits and 1 run (a home run by Rajai Davis), walked two and struck out six. No BSing around, he was aggressive and retired hitters quickly. At least twice last night I was channel surfing in-between innings and came back to find Dice-K pitching with one out already.

It was 1-0 Oakland in the fourth when Eric Patterson tripled and scored on David Ortiz' deep fly. One out later, Adrian Beltre hit a bomb into the left seats to make it 2-1.

Daniel Bard got out of the seventh with a pop up, but put two on in the eighth before he got out of that jam. Jonathan Papelbon got the A's 1-2-3 in the ninth (which is always a pleasure) for his 21st save, and a great start to a crucial swing on the West Coast. Matsuzaka is now 7-3.

Tampa Bay also won last night, so they are now 2 1/2 behind New York, who was idle. The Red Sox trail the Rays by 3 1/2. Tonight, Tim Wakefield makes what could be his last start for some time, with Clay Buchholz returning tomorrow and Josh Beckett making his return on Friday in Seattle.
Posted by The Omnipotent Q at 11:40 AM

I hope we have seen a corner turned here, Rick. It was one of Dice-K's best games last night.