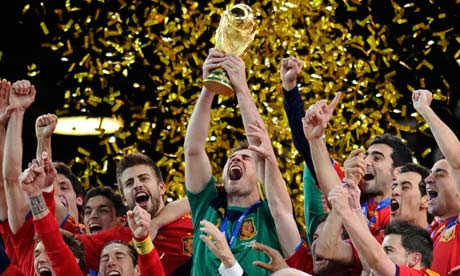 Congratulations to Spain on their first World Cup triumph at the first final in their history, as they downed the Netherlands, 1-0 in extra time.

It won't go down as one of the great World Cup Finals in history, as it was rather chippy throughout, with a ton of yellow cards handed out (14 to be exact), and the Netherlands played one man down, as Dutch defender John Heitinga was sent off late in the match. (Actually, the Dutch were fortunate not to be two men, as defender Nigel De Jong should have gotten a red and an exit for planting his studs into Xabi Alonso early in the match.) There were a ton of stoppages for fouls and cautions.

The match looked like it was heading for penalty kicks, which also happened at the 1994 and 2006 Final. (It's just an awful way to decide a world champion.) But in the 116th minute, Andres Iniesta scored the only goal, sending the Spanish into a frenzy.

They held on for the win, and after it was over, the victorious Spanish changed into their normal red jerseys (they wore navy blue today, as the red and orange of the Dutch wouldn't have blended well) and accepted the FIFA World Cup for the very first time. Goalkeeper Iker Casillas, Spain's captain, was probably the MVP of the tournament, as he allowed just two goals throughout the tourney. (Spain scored a record-low 8 goals for a world champion.)

I was at Professor Thom's today, and a good crowd was on hand. (Not as big as the USA's matches, but still a good turnout.) It was about 50-50, and I did see a number of jerseys supporting both teams.

And, Paul the Psychic Octopus was correct again!

Congratulations to Fernando Torres and Pepe Reina, both of Liverpool, who were on the winning side. The Dutch played hard and gave it everything they had, and the nation of the Netherlands should be proud of their boys.
Posted by The Omnipotent Q at 7:19 PM