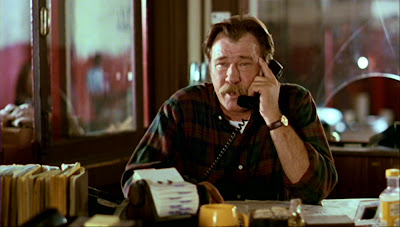 I was saddened to learn of the passing of James Gammon today of cancer at the age of 70. He was a gravelly voiced character actor who was in such films as "Ironweed," "Silverado," and "The Milagro Beanfield War," and such television shows as "Nash Bridges," "The Waltons" and "Bagdad Cafe." And of course, he starred in the immortal film, "Cabin Boy."

But for me, he will forever be manager Lou Brown of the Cleveland Indians who took the Tribe from dead last to a one-game playoff win over the New York Yankees in "Major League." It is absolutely one of my favorite baseball films of all-time.

One of my favorite scenes (pictured above):
Charlie Donovan: How would you like to manage the Indians this year?
Lou Brown: Gee, I don't know...
Charlie Donovan: What do you mean, you don't know? This is your chance to manage in the big leagues.
Lou Brown: Let me get back to you, will ya, Charlie? I got a guy on the other line asking about some white walls.

Another favorite, addressing the troops on Opening Day:
Lou Brown: All right people, we got 10 minutes 'till game time, let's all gather 'round. I'm not much for giving inspirational addresses, but I'd just like to point out that every newspaper in the country has picked us to finish last. The local press seems to think that we'd save everyone the time and trouble if we just went out and shot ourselves. Me, I'm for wasting sportswriters' time. So I figured we ought to hang around for a while and see if we can give 'em all a nice big shitburger to eat!

Here's more on the the career of James Gammon.

Thanks for the laughs, Mr. Gammon. Godspeed.
Posted by The Omnipotent Q at 12:02 AM