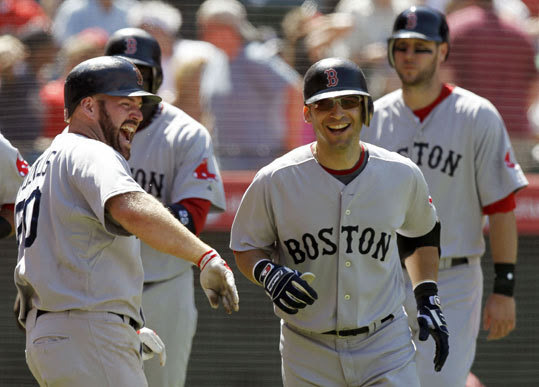 No, the Red Sox haven't won seven in a row, but have now taken seven consecutive games from the L.A. Angels since Jonathan Papelbon's October Meltdown of 2009, as the Sox whacked the Halos, 7-3.

After a truly dismal showing in Oakland and a very unsatisying split of four games in Seattle, the Sox caught a slumping Angels team and wound up with a terrific sweep and a 6-4 record on the west coast swing.

Beckett allowed three runs, but it easily could have been none. Jeremy Hermida butchered a ball in left that led to two Angels runs, and Bill Hall lost a ball in the sun that put Reggie Willits on second, and he scored two outs later that gave the Angels a temporary lead.

Manny Delcarmen and Ramon Ramirez finished up, with MDC bringing on a little drama, but Hall saved him with a terrific catch to end the 8th.

Tampa Bay and New York both won, so the Red Sox return to Fenway seven behind NY and five behind the Rays. Thursday is a well-deserved off day and on Friday the Sox begin a seven-game homestand with the Tigers and Indians coming in. Friday Johnny Damon returns to Fenway for the first time without pinstripes.

Should be interesting the reaction he gets.
Posted by The Omnipotent Q at 11:30 PM

The rotation seems to be going well. At some point we are going to have to have an epic homestand.

Why not? It would be a fabulous, Rick, especially as the next trip begins in the Bronx.