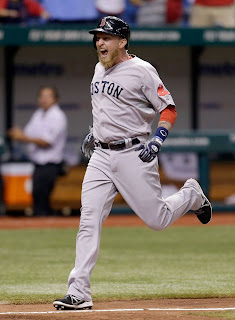 It was an emotional day at the World Trade Center site on Wednesday, to remember the victims of the worst attack on our country ever. It is still hard to get used to the idea it has now been 12 years since that awful day happened. But I am very proud to have been there to remember my late friend Joyce and all the other victims.

I got home yesterday afternoon and put on the TV and just relaxed. I wanted to do nothing but watch baseball. And I looked forward to another Red Sox game at Tampa Bay, and wasn't disappointed by the results.

Brandon Workman gave up single runs in the 7th and 8th innings, and it allowed Tampa Bay to tie the Sox at 3. But John Farrell brought Koji Uehara into a tie game in the ninth and naturally they went 1-2-3. The great Uehara has now retired the last 34 straight to set a new Red Sox record.

It became a very smart move, as Mike Carp (pictured) blasted a pinch-hit grand slam off Roberto Hernandez (I knew when he came in, a Sox win was at hand), and Junichi Tazawa closed the door for the win.

So how many of you were jumping for joy whe the Sox signed Uehara as a free agent, and traded for Carp this past spring?

They have become to integral parts of this amazing Red Sox season. Carp's blast was the first time ever that a Red Sox pinch-hitter has hit a grand slam in extra innings (and the first in MLB in 10 years). Uehara has now been perfect over 11 1/3 innings.

The win lowered the Red Sox Magic Number to win the AL East to 8. They are now 42-33 on the road, and have clinched a winning record away from Fenway for 2013. They are also 8-2 for September, which is more wins they have had in either of the last two Septembers. They have nearly matched the total number of runs they scored last September (78-76).

The Sox are now 89-58 overall, and lead by an amazing 9 1/2 games. They are 16-5 since Dempster plunked Slappy. (You remember that incident, right? That was the one that many idiotic pundits said would come back and "haunt" the Red Sox.)

BTW, I enjoyed listening to Derek Lowe do last night's game with Don Orsillo on NESN. He came across as knowlegable, funny and self-effacing. I could see him landing a broadcasting gig with someone down the road if he chooses to go that route.
Posted by The Omnipotent Q at 12:47 PM