Now, the best the Red Sox can finish with is 99 wins, if they take the remaining four games. That would match the best finish since 1978. Not that big a deal really. But what still remains a big deal is the Red Sox earning the number one spot in the AL playoffs, and currently they lead the Oakland A's by just one game. The red-hot A's were cooled off in Anaheim last night by the Angels, 3-0. Both teams have four games left. 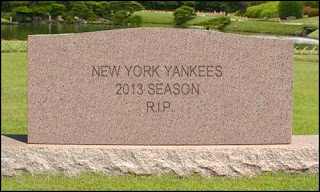 And by the way, the Rays win over the Yankees last night but New York's death number at 1. So that means should they drop another to the Rays tonight, or the Indians beat the White Sox in Cleveland, today will officially be "Yankee Elimination Day."
Posted by The Omnipotent Q at 12:07 PM