Wait 'Til Next Year? 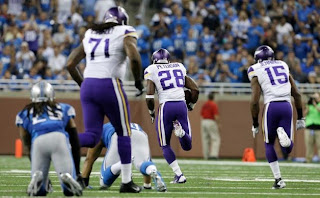 I have to admit that my mind really isn't totally on football right now, what with the Red Sox in first place and zooming toward a possible postseason berth.

But even with them wrapping up their weekend series in the Bronx yesterday, I did tune in to "NFL Red Zone," which goes from game to game every Sunday, and is blast to spend an entire football day with.

So I did catch some of the Vikings opener in Detroit, and it looked really promising from the start, with the great Adrian Peterson picking up from where he left off last December by running 78 yards from scrimmage the first time he touched the ball for a TD, giving the Vikings an early 7-0 lead.

It was all downhill from there. It was a sloppy loss for the Vikings, with mistakes galore on both sides of the ball.

The Lions went on to a 34-24 win (when did the Lions get Reggie Bush?), as AP did score two more TDs (one rushing, one passing), but was held to 15 yards rushing the rest of the afternoon.

As Brandon Workman was throwing a ball to backstop at Yankee Stadium yesterday, the Lions went into their "victory formation" at the same time. I sure wasn't a happy camper at those moments.

The Vikings head to Chicago next week, to face a Bears team that won yesterday. The Vikings simply can't open this season 0-2.

And Notre Dame got hammered in their final game against Michigan at the Big House on Saturday, 41-30. They've opened the year at 1-1 after their opener win against Temple at South Bend. Gotta feeling a return to the BCS title game isn't in the cards this year.
Posted by The Omnipotent Q at 12:05 PM