Stompin' Their Way To a Season Series Win 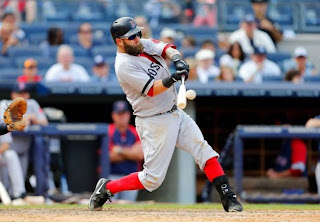 OK, I'll admit it. I was nervous when the Yankees were scoring those runs late in yesterday's 13-9 win.

And I give John Lackey a pass for the 7 runs he allowed yesterday. It seemed like every game he pitched over the last month was 2-0 or 3-1 loss where the offense just didn't bother to show up. So when they hand him a 12-3 lead by the fifth inning, it can happen that a pitcher gets a bit too "comfortable" and the other team hits him a bit.

The Sox bent slightly, but didn't break in officially winning the series yesterday. They have now won all three series they played at Yankee Stadium this season, going 7-2 there. They have also won the season series for 2013 at 10-5 (with today and a three-game series at Fenway next weekend still remaining).

The smoking-hot Sox lineup has simply battered an ice-cold Yankee pitching staff for 34 runs in three games. Four more home runs by Mike Napoli (twice), Jonny Gomes, and the first MLB shot by Xander Boegarts ( a blast over the left field bullpen) gave them 16 over the past four games.

For more fun facts about this Yankee Stadium beatdown, check out this post by Allan at The Joy of Sox.

The Sox go for what could be an historic sweep today with Jon Lester on the mound. Tampa Bay's loss last night in Seattle puts them 8 1/2 games back. The Sox' Magic Number for the AL East title now stands at 12.
Posted by The Omnipotent Q at 10:54 AM