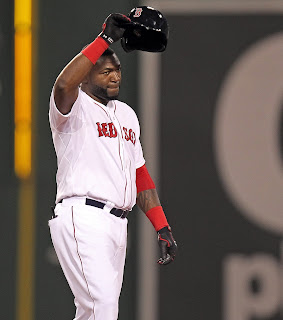 The Red Sox wrapped up their nine-game homestand in grand style last night, with an historic 20-4 beatdown of the defending AL champion Detroit Tigers.

Before the homestand started, I was hoping the Sox could go at least 6-3. And I was optimistic about possibly going 7-2. 7-2 is exactly what they accomplished.

The Sox tied a team record of 8 home runs last night, and it was the first time in team history that 7 different players left the yard. For those of you scoring at home, they were hit in this order: Stephen Drew, Jacoby Ellsbury, David Ortiz, Will Middlebrooks, Danie Nava, Ryan Lavarnway, Ortiz again, and Mike Napoli.

It was a nip and tuck game with Detroit at 5-4 in the sixth when Will Middlebrooks hit a grand slam that put the game out of reach at 10-4. The Sox went on to put up an 8 spot in the inning. (Who would have guessed that when the Sox were down 4-3 in the 4th inning that 17 more runs would have scored in the game, and the Sox would score all 17??)

An amazing night where David Ortiz not only hit two home runs, but his double was hit number 2,000 in his storied career.

The Sox took the series from one of MLB's best teams. After two nail biters, the Sox had an easy one. (Boy, what must John Lackey have been thinking seeing all those home runs last night?) And in my mind, they are making a statement for all of MLB to see: they are focused, taking on all comers, and have their eyes firmly on the prize. They are 10-4 since Ryan Dempster plunked Alex Rodriguez. Hot at just the right time.

Now the Sox hit the road for 7 games against division rivals New York and Tampa Bay.
Posted by The Omnipotent Q at 11:11 AM