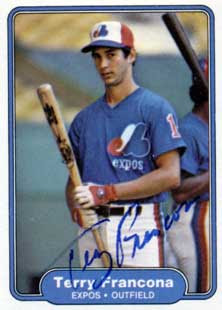 Well, it's THAT day again.

As of today, I have been walking God's Earth for 47 years now. Last night I went out for a nice dinner with my dear friend Deborah, to an Italian restaurant in Manhattan called La Pizzeria Fresca. It was really terrific, with a very good atmosphere and good pizza. As we about to have dessert, I saw a waiter coming to our table with a chocolate dessert with a single candle as I heard a recording of "Happy Birthday" played in the restaurant. I looked at her and she smiled at me. The patrons applauded when it concluded.

Oh, that Deborah is such a sneak! And I thank God she's a part of my life. She's a gift from a dear friend who we both miss very much.

Today I am not planning anything special. I'll be home watching the NFL playoffs, and hoping the Minnesota Vikings can give me a nice birthday present. They actually won their only NFL title (just before the merger with the AFL) on January 4th, 1970, against the Cleveland Browns, 27-7. I think the Giants will be rooting for the Vikings today too, as if the Vikes win, the Giants play the Arizona Cardinals, who beat Atlanta. If the Eagles beat the Vikings today, they will play Philly next weekend.

It's hard to believe I'm 47 today. I'm the same age as the uniform number of the guy whose pictured in this post. (You mean you didn't know that Tito wears 47? I think most of the world doesn't.) It's like I keep saying to myself every birthday, "It's just a number. It's just a number."

One of these years I'll finally believe it.
Posted by The Omnipotent Q at 12:41 PM

Happy Birthday, Old Man Q! Hope you get some good presents today. I hope The Vikes do something good for ya.

I am only 10 years younger than you!! I am not and never will be old-just immature.

Happy Birthday, John. I think this calls for a round of 'The Number 47 Trivia', or maybe 'Things That Happened in 1962'.

How's this: January 4, 1962 New York City introduces a train that operates without a crew on-board. Maybe it was called the Q-train.

Happy birthday, Jay Cue. And many more to come. I have you by nine years, but no gray hairs yet, thanks to my late Dad's genes. I hope your Sunday was great even if the Vikes went down...at home in the dome. Deborah sounds wonderful and in you she has such a great big-hearted friend. Have a great post birthday Monday. Here's to 40 more years.

Matt: I discovered that same fact about the NYC subway going crewless on the day I was born many years ago. They still are, aren't they? See you on Tuesday night.

Thanks also for the birthday wishes, Eileen, Steel and Soxy Lady. i had a nice day, despite the Vikings letting me down for the 37th straight year.

Deborah is a really amazing friend, Peter. I'm blessed to have her in my life.

Mine will be on the 14th of this month;