Welcome to the Hall, Jim Ed 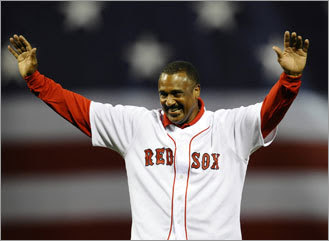 The incredibly long, agonizing wait for Jim Rice has finally come to an end, as he was elected to Baseball's Hall of Fame today, along with Rickey Henderson.

It was Rice's last shot to be elected by the writers, and in my opinion, it was way too long a wait. But at least he is finally in.

Henderson was a slam dunk, and was named on 511 ballots. (I'd like the 28 who didn't vote for him to explain why.) He was named on 94% of the ballots cast. Andre Dawson was a distant third, 44 votes short and Bert Blyleven was denied yet again, and received just 62% of the vote. (Keeping Blyleven out is a continuing travesty.)

Congratulations to both men, especially to Rice. It is a well-deserved honor.

Now let's retire number 14 this year, too.
Posted by The Omnipotent Q at 1:58 PM

This is SO great!