A Lyric Little Bandbox of a Ballpark 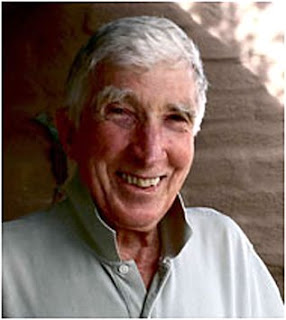 The great author John Updike died of lung cancer on Tuesday at the age of 76. He's probably best known for his fiction, and his "Rabbit" series of novels. But he will be forever remembered by Red Sox, as well as all baseball fans, for his great remembrance of Ted Williams' last major league game, "Hub Fans Bid Kid Adieu," and the first line which attached itself to Fenway Park and will remain there for all eternity:

"A lyric little bandbox of a ballpark."

Thank you Mr. Updike. (And thanks to my friend Jere for posting Mr. Updike's immortal piece on his site today.)

(P.S. Unless you read Mr. Updike's piece, you probably didn't know that the Red Sox actually came from behind to win Ted's last game, with two runs in the bottom of the ninth, 5-4. Ted's final blast made it 4-3 in the 8th, setting the stage for the Sox comeback win.)
Posted by The Omnipotent Q at 1:28 AM