No Other Place In The World I Could Be Today 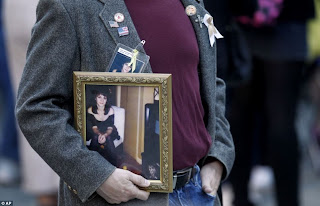 It has now been a dozen years since one of America's darkest hours occurred: the loss of nearly 3,000 people with attacks on the World Trade Center and The Pentagon.

As many of you who read this blog know, my dear friend Joyce Carpeneto was one of that day's victims. I have honored her memory every year on this day here. I will be at the ceremonies on Wednesday morning, along my dear friend Deborah. We have been to all 11 of them, and I will continue to go to them on every September 11th as long as I live.

Everything in my life stops every September 11th. The Red Sox take a back seat today. It is the most sacred of days for me. The 9/11 Memorial is simply spectacular, and it is fitting tribute to those beautiful souls lost 12 years ago. (The picture above is of me, holding Joyce's picture from last year's remembrance.)

Every year I put the past September 11 tributes I have posted on this blog, and this year will be no different. Please feel free to check them out. It is some of the proudest things I have ever written. (The first one, from 2006, includes the memorial and poem I have written in Joyce's memory.)

And as I have done the last few years, I will end with a quote from the TV series, "Third Watch." It was after the funeral for a firefighter lost in the attacks, and it was said by actor Bruce Weitz. The show was first broadcast in 2002, but 11 later, it is still as meaningful as it was then:

"It's been 233 days since September 11th. I've been to 28 funerals and memorial services and I should have gone to more, but some days I just couldn't face it. 233 days and in a few weeks it's going to be over. Everyone and everything that was going to be found will have been found. Won't be any place to dig. And then we are just going to have to walk away. And there will be a park with a marble monument with names that will slowly stop seeming like real people. Soon enough it will be just us. We will be the ones who remember. That's what we can do to honor the people we loved and lost. We can be the ones who remember."


We'll never forget you, Joyce, or any of those beautiful souls lost 12 years ago today. Ever.
Posted by The Omnipotent Q at 12:02 AM