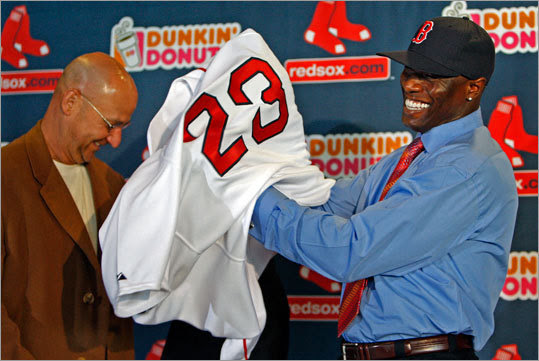 The two newest Red Sox players, Mike Cameron and John Lackey, were both introduced at Fenway Park yesterday in separate news conferences that were attended by Terry Francona and Theo Epstein.

When the day concluded, Cameron was seen crossing Yawkey Way and headed into the Twins souvenir store. He was seen shopping for Red Sox gear, and said he wanted to buy some stuff for his kids.

Cameron is known as a good clubhouse guy and respected by all his teammates. And until yesterday, I didn't know his Single-A hitting coach and AA manager was one Terry Francona.

Mike said this yesterday (with thanks to The Joy of Sox for the quote):
I haven't really been this excited about coming somewhere since I first came to the big leagues.

I think I'm going to like this signing.
Posted by The Omnipotent Q at 12:24 PM