Is This Anything To Worry About? 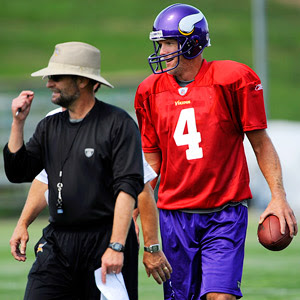 Well, as the football world knows too well, Brett Favre and Brad Childress had "an animated discussion" on the sidelines during the horrible 26-7 loss by the Vikings to Carolina on Sunday night.

Apparently, Childress is pissed at Favre for some of his audibles at the line of scrimmage, even the ones that proved to be correct and worked. Favre is miffed at Childress for considering to remove him from three different games, the ones against Detroit, Green Bay and Carolina.

It seems to me that Favre wants to run the whole offensive show, and Childress is putting his foot down, letting Favre and the other players know he indeed calls the shots.

Why am I not surprised at all this?

Well, when you bring on a player of Favre's caliber (as well as ego), you can expect him to want to do things his way. I'm sure both player and coach will downplay the incident from Sunday night when they talk to press on Wednesday.

The Vikings offense has been in an horrific slump the past two road games, and they play their final one in Chicago on Monday night, and it will be the coldest game the Vikings will have played in this year.

The Vikes have a whole lot to prove on Monday night. The ship is going in the wrong direction, and another flat, listless performance aginst a Bears team playing out the season may signal to the Vikings detractors that they are really just a pretender that played over their heads this season. They also have to calm down the fan base, as the nerves and doubts are bubbling to the surface.

The Philadelphia Eagles are breathing down the necks of the Vikings, and if both teams are tied at the conclusion of the season, Philly gets the first round bye. And the Vikes will rue the Carolina game from the rest of the year if that happens.

So it's up to everyone to get back on the same page and focus on beating Chicago on Monday. Especially the two guys with the biggest egos in the room.
Posted by The Omnipotent Q at 11:24 AM