The Coolest Celebrity I've Ever Met 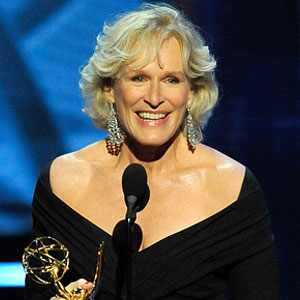 As many of you know, I've been working as a background actor since August, and it's really been a blast. I've been on many projects associated with TV, movies and commercials here in New York City. I've haven't talked about it much here on the blog (more on my Facebook page), but in my new position, I had an encounter back in September with what I believe is the coolest celebrity I've have yet to meet: Glenn Close.

I got an assignment to be on the FX TV show, "Damages," which films its interiors at the Steiner Studios in Brooklyn. The new season hasn't debuted, but one of the first shows of the upcoming season I will be a part of. And they gave me a pretty good background role, too.

I had a scene at a conference table in the Hewes law offices, and scene involved both Ms. Close and her co-star, Tate Donovan. Before I entered the set, there was a crafts table with all kinds of snacks on it, and right smack in the middle of it, there was Glenn's Emmy award, that she had won for Best Actress just a few days earlier. There was a lovely note next to it, written by Glenn, thanking everyone in the cast and crew for making it possible for her to win her second straight Emmy. And everyone was taking pictures with it, and a friend of mine, who just happened to be on the shoot that day, took a picture of me with holding it. (I couldn't help but think of the two Red Sox World Series trophies I've had my picture taken with at that very moment.)

As soon as I walked on the set, I saw the stars sitting at the table, and one of the PAs saw me and said, "Let's put the guy with the bright red tie (me) next to Glenn." Wow. I walked over to the seat, and as soon as I made eye contact with Ms. Close, she stuck out her hand and said, "Welcome to the set." Wow. Again. She also had her dog with her, a little terrier who is the most well-behaved dog I've ever seen. (He never uttered a sound in the entire time I was there.)

We went through about an hour's worth of rehearsals, and on the break, Glenn asked everyone of us background actors (there were five of us) to talk about what we also did away from acting. When she got to me, I told her I run a Trivia Night in the Village. Her eyes lit up, and she told us how much she loves trivia, and then she stared asking me all kinds of questions about my Trivia Night: where it was, what kind of questions I write, how many people are allowed by per team. Then she pulled out a notepad and wrote down the info about Professor Thom's, and she said she'd love to come out and play one night! (I really wouldn't expect her to, as she puts in long hours on the show, but it was really sweet of her to say so.)

I simply couldn't believe the conversation I was having with her. She seemed very genuine and nice, like I was an old friend. Same goes for Tate Donovan, who asked me where I got my questions and did I do it all by myself. (He seemed impressed when I told him I do it all on my own.) I then told Glenn I was going to be a contestant on "Who Wants to Be a Millionaire" in a few weeks, and she said she loves the show and was impressed by that as well. (I chatted about that with Meredith Vieira when I was on the show, and she told me that she was friends with Glenn.)

In the show, I played a "ponzi scheme victim," one of eight folks brought in to the law firm after the guy who ran the scheme was shot at by someone. We were "the most vocal people about it" (ironic that I say nothing on the show of course). We spent about 4 hours on the set shooting scene from all different angles in the room. And it was simply a joy to be a part of it. The cast and crew get along famously, and they seemed like a big family. I felt like I was welcomed into Glenn's home, and she was a wonderful host. She has absolutely no ego whatsoever, and couldn't have been any nicer to all of us peon extras!

The new season of "Damages" begins on January 25th on FX, and I would guess my episode runs some time in February. (I'll keep you all informed as to the date when I find out.)

I've met many nice celebrities in my life (most are to be honest), but Glenn Close is at the top of my list. And I thank her for being so incredibly nice to all of us on my time there at "Damages." I haven't been called back since then, but I hope I do again. I look forward to chatting with her once again about my adventures in trivia.
Posted by The Omnipotent Q at 11:39 AM