A Night of Henry, Werner and Kayreoke 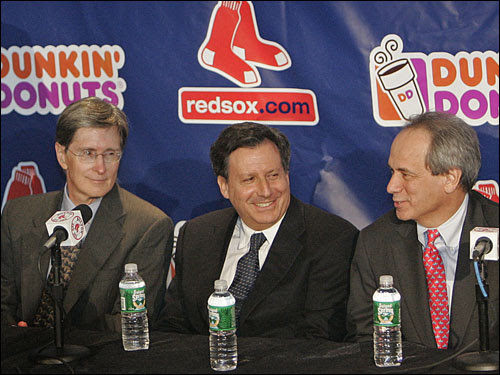 It was a night to remember at Professor Thom's pub on Tuesday night. We had a second consecutive Kayreoke Night at the bar, after a successful night of Kayreoke and Trivia on Monday. Things got off to a rather dubious start, as we had problems once again with the sound system, and a few other problems as well.

And just as the first pitch was being thrown in Atlanta between the Red Sox and Braves, who should come walking into the bar unannounced but John Henry and Tom Werner (pictured, left and center respectively, with Larry Lucchino), two of the principal owners of the Boston Red Sox.

The bar has become well-known not just by Red Sox fans in New York City and Red Sox Nation, but the club is aware of Thom's as well. (There were rumors that Mr. Werner was coming in a few weeks ago, but for whatever reason it didn't happen.) With everything going wrong, I saw my buddy Chris at the bar as soon as they walked in and he glanced at me with a look like, "Oh my God, just what we needed!" And they picked Kayreoke Night, of all nights, to come in. (I discovered in today's New York Daily News that John Henry was in New York yesterday and took a tour of the Mets' new Citi Field that's being constructed in Queens, with Mets owner Fred Wilpon. So I guess he decided to take in a Red Sox game at Thom's since he was in New York.)

Mr. Henry and Mr. Werner sat down at a table right next to the spot we had set up for Kayreoke. As they were watching the game on the huge screen, Mr. Werner turned to me and asked me about Kayreoke Night and what it was all about. I explained that Red Sox fans take turns calling a half-inning with the sound turned off, and can talk about anything they like regarding the game. (I was tempted to ask him if he wanted to take part, but I let that go.)

After I explained it, I shook hands with Mr. Werner and simply said to him, "Thank you. Thank you for this." And I pointed to the hat I was wearing that said, "World Series Champions 2004" on it. I then put out my hand to Mr. Henry. He shook it and I said, "Thank you Mr. Henry, for making my life here in New York City so much more bearable." They both smiled.

The word spread throughout the bar that two of the principal owners of the Red Sox were here watching the game, but on only one occasion did I see any fans go up to them and talk to them. They were both very courteous to the fans, as I'm sure they have Sox fans coming up to them all the time. Fortunately we did have a good crowd for the game, and for Kayreoke Night as well. (I also made it a point not to mention that they were there when I was on the mic, as I figured they probably wanted to enjoy the game in peace without having fans come up to them every five minutes.)

We got going at the top of the 5th inning, and we did Kayreoke for four innings. (And I was thankful we had the Braves announcers, and not Don Orsillo and Jerry Remy, to turn off during those half-innings, as NESN was blacked out on DirecTV last night.) Chris told me he heard that both Mr. Henry and Mr. Werner enjoyed hearing the fans get up on the mic and describe the action. When the game was held up by rain after the sixth inning ended, both owners got up and called it a night. They were very gracious and came up to myself, Chris and Jim and thanked us for the evening. Chris had a camera and they both posed for pictures with Chris and Jim. It was "the Red Sox owners with Professor Thom's owners." I'm sure that picture will be framed and put behind the bar at some point.

We completed Kayreoke in the eighth inning, and everyone had a good time doing it. (We'll be doing Kayreoke again next month, possibly July 24, as that is the next Tuesday night in July the Red Sox are on the road, in Cleveland.) It was really an incredible night, as the Red Sox won behind Josh Beckett, 4-0, and we got to meet the men who run the Red Sox. A night that looked like it might be a total washout turned into one none of us will ever forget.
Posted by The Omnipotent Q at 10:56 AM

That sounds like it was an absolute blast, Q! I would have loved to have been there - maybe I could have dazzled them enough with my play-by-play skills to be put onto the short list should Orsillo retire :-)

It sure was, Suldog. I was choosing my words carefully, but there was a part of me that was hoping to get noticed...LOL

Amazing ... I would have loved the opportunity to rub elbows with the big dogs ...

Geez, when I ran into Josh Beckett in Minneapolis, I about fainted when we had a VERY BRIEF conversation ...

How much money, indeed. Next time, call me and I'll mug 'em on their way out. Sheesh.. THINK, McFly! THINK!

I wonder what would've happened if Larry Lucchino & Fred & Jeff Wilpon had walked in?