Schilling Misses a No-No, But Gets a Big W 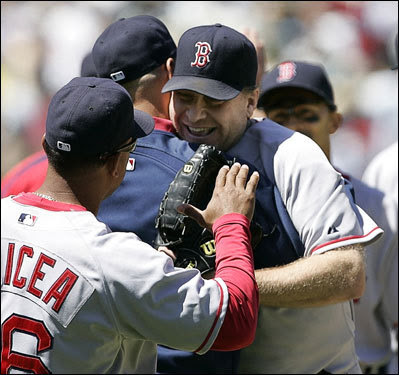 Curt Schilling came within one out of tossing the first no-hitter in his major league career on Thursday, as it was broken up by a clean single to right by Shannon Stewart. But much more importantly, the Red Sox broke a four-game losing streak with a 1-0 victory over the Oakland A's.

And I didn't see one pitch of the game.

"Who Wants to Be A Millionaire" screwed me over again.

Very quietly I decided to again take the test to try and become a contestant on the show. I took it last month and passed, only to be rejected for the contestant pool after an interview. About a week ago I got the word that June 7th at 5 PM would be open for the exam, so I took it. The Sox were playing an afternoon game that day, but I decided to go for it. And the events of the previous days really made it a good idea that I pass on the game.

I followed the updates on my cell phone in Manhattan. It was the third inning with the Sox up, 1-0. My next update was 30 minutes later. Sox still up 1-0, mid 5th. Schilling must be pitching a good game, I thought. After the exam was over, the next update said the Sox were still up, 1-0, 8th inning. On none of these updates did it say that Oakland had no hits. I cruised down to Professor Thom's and got there 2 minutes after the last out was made. Sox win, 1-0. Terrific.

I met my friend Matt who told me Oakland had just one hit. Wow, I thought. Then Matt gave me the news. Schilling gave up the hit with two outs in the bottom of the ninth. Holy mackerel.

I was disappointed for Schill but was happier the Red Sox got the win and stopped the losing streak.

I was miffed I missed this entire game.

And to top it off, I didn't pass the exam. I'm done with "Millionaire."

But much more importantly, Curt Schilling dominated the A's today, throwing just 100 pitches and striking out four, and walking none. He allowed only two base runners, the other reaching on a Julio Lugo error. (BTW, only two pitchers older than Schilling have ever tossed a no-hitter: Nolan Ryan and Cy Young.) For the fourth time this year Schilling won a game after a Sox loss, and they avoided a four-game sweep in Oakland.

BTW, Lugo's error didn't cost Schilling a perfect game as some have suggested. If Lugo had fielded that ball cleanly and gotten the last out, who knows whether the next hitter, who ended the fifth, would have led off the sixth with a home run or a double, or whatever. If the error hadn't been made, the entire game changes. You don't play baseball in a vacuum.

The Red Sox offense once again was AWOL on Thursday afternoon, as David Ortiz' first inning homer was all the offense the Red Sox got all day. But it was all they needed, and it got the Red Sox back to their winning ways as they head to Arizona with a weekend series with the Diamondbacks.
Posted by The Omnipotent Q at 10:56 PM

I had such a great time watching Schill and the lumber-less Sox. I was lucky enough to be home before 4. Have a great weekend, and 2 of 3 is a MUST!!!!!
I want to give a shout-out to the Sox bats. "Hey, I'd be great to see you....soon."
Have a wonderful weekend.

Man that is so frustrating! I saw Chris Young take a no-hitter into the 9th (8 1/3 before giving up a homer to Joe Randa) last season and it was electric. I've never seen one in person.

Of course my favorite no-hitter story involving Schilling was when Padres catcher Ben Davis broke one up with a bunt single while Curt was pitching for the Diamond Backs.

Lots of luck to the Sox! Hope they can cool off the D'backs this weekend.