Tavarez vs. The Traitor 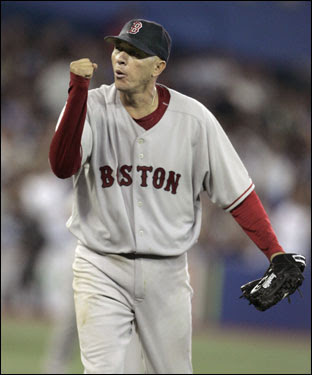 The Red Sox took the first two games in Arizona this weekend, winning 10-3 on Friday, and 4-3 on Saturday night. They now have won three straight, and are now 3-3 on the this western swing.

Jason Varitek hit a two-run shot, and then doubled home J. D. Drew to tie the game in the eighth. A sacrifice fly in the tenth by Mike Lowell was the difference in the game. Hideki Okajima got the win and Jonathan Papelbon got his 14th save.

Another decent performance by Julian Tavarez (pictured), who gave up a two-run shot to Stephen Drew in the fourth as the Red Sox fell into an early 3-0 hole against Arizona. But he kept them there, going six innings and eventually getting a no-decision.

As the whole baseball world knows, Roger Clemens made his return to the Yankees today, as they beat the Pittsburgh Pirates, 9-3. I only caught parts of the game, as I did not want to listen to The Clemens Lovefest going on at the YES Network. I'm sure that they, along with most Yankee fans, are pretty satisfied with The Traitor's performance today. (It's really something to watch the same fans who felt Clemens turned their backs on them on 2004 and "unretired" to Houston give The Carpetbagger standing ovations today. Desperate people do desperate things.)

But it is interesting to compare his outing today with the one that Tavarez gave the Red Sox.

Very similar, no? Also remember, Tavarez is the Red Sox fifth starter, and has given the Sox some pretty decent starts over the last month to six weeks (remember he also beat the Yankees twice in the Bronx). Clemens was facing one of the weaker lineups in the National League on Saturday. Wait until he faces the harder-hitting lineups of the AL. I predicted when he returned to New York that The Carpetbagger would give the Yankees some decent starts, win maybe 8 or 9 games, and have an ERA around 4.50. So, what was his ERA after this start? 4.50. (Anyone who thinks he'll end up with an ERA below 3.00 is deluding themselves.)

The man who will be replacing Tavarez in the Red Sox rotation, Jon Lester, had a rocky outing for Pawtucket on Saturday, giving up 3 earned runs in 2 2/3 innings, while throwing 70 pitches. He walked three and struck out just two in a loss to Ottawa.

No rush returning Lester to the Red Sox rotation. The man we like to call Hatchet Face continues to do a decent job, so keep Lester down there until he is sharp and ready for Boston. I would still bet he'll be in Boston by the end of June.
Posted by The Omnipotent Q at 2:12 AM

Your comparison stats were, and are, great. Julian was plain old just fine! And the bats came to life (thanks 'Tek!) just in time. Now that the Yanks are hot, we will be too. Must-like hot!

& Rogggggahhh, being the Coward that he is, decided to choose an NL CENTRAL Club, to begin his comeback:

"The Big Jerk" is back