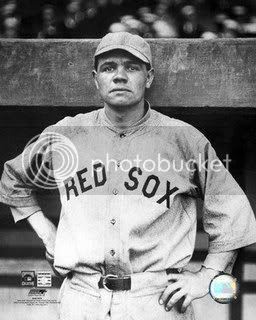 Today is the 114th birthday of the greatest player the game of baseball has ever known: Babe Ruth.

As the years have gone on, I have come to appreciate what Babe Ruth meant to the game. When I was a kid I rooted for Hank Aaron to break Babe's all-time home run record very much, because he would be breaking a "Yankees" record.

I never put any stock into that "Curse of the Bambino" crap, as that was just media-created nonsense and a taunting device aimed at the Red Sox and their fans. The Babe's daughter has always said he never held any grudges against the Red Sox for trading him to New York. (Actually he should have been sending Harry Frazee Christmas cards every year for doing him the biggest favor he could ever have done him. So the idea of a curse makes absolutely no sense.)

As the years progressed, I've read up a lot on the Babe, and Allan Wood's book, "Babe Ruth and the 1918 Red Sox" is a terrific starting point to read about him with the Red Sox. (You may know Allan better for his great blog The Joy of Sox.) I have not read Leigh Montville's latest tome about the Babe, but I will at some point. Every player and fan should thank the Babe for his contribution to the game, and it's not a stretch to suggest that he may have saved baseball when it was at its lowest point ever, the Black Sox scandal of 1919. Baseball was in deep trouble in the early 1920s when the Babe came along to set the sporting world on fire with his home run records. (I won't list them all here, but here's a column I wrote two years ago about him on the anniversary of his death going into more detail.)

So, Happy 114th Birthday, Babe. Hope wherever you are it's a good one.

And speaking of birthdays, Happy Birthday to my sister Maureen, who is considerably younger than the Babe is today. And on the subject of births, congratulations to my buddy Chris Wertz and his wife Brooke on the birth of their twin daughters earlier today.

Years from now, you can tell them they share a birth with the Babe and my sister, and they were also born on Truck Day!
Posted by The Omnipotent Q at 12:07 PM

Happy birthday to da Babe! And speaking about great, stupendously tremendous baseball books, have you read the bio of the Yankees Lou Gehrig? It's called THE LUCKIEST MAN, and it was amazing and reads like a novel. I wonder how much he would have gone on had not ALS slowed him to a crawl, and then cruelly killed hime. This book encompasses his entire life, and the baseball detalls are mesmerizing. I give it five stars (out of five). John, you'll come to respect the man Lou was even more than you do now. Go to Amazon dot com and look the title up. THE LUCKIEST MAN. It's a large style paperback and quite affordable. You will love it. That's a promise from me.

Thanks for the recommendation, Peter. I've always admired Lou Gehrig and not just as a ballplayer but as a man and the courage he showed when his time was coming to an end.

Then you will NEVER forget reading this book...NEVER! Go for it!!