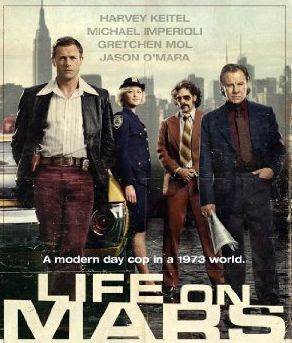 I was watching "Life on Mars" on ABC last night, which I've been watching since it debuted late last year. If you haven't seen it, it's an interesting show (based on a hit British show) about a current day New York cop who gets hit by a car and is transported back to New York City in 1973 (which I remember oh so well). They do a nice job recreating that time period. I've always been fascinated by time travel.

Last night, the main character, Sam Tyler (played by Irish actor Jason O'Mara, who is really good) arrests a New York City councilman who tells him he also landed back in 1973 after getting hit on the head in 2009. He asks him to prove he came from 2009:

"Have the Red Sox won the World Series?"

Sam believes the councilman, who ends up getting murdered just moments later. But I love it when the Red Sox are mentioned in shows like this (there was a "Lost" episode a while back that showed the final out of the 2004 World Series to prove to Jack, one of the main characters, that it had indeed happened), especially when it has nothing to do with Bill Buckner or any kind of stupid, media-created "curses."

MLB Network is beginning their continuing Spring Training special, "30 Clubs in 30 Days" tomorrow night, and appropriately enough will begin with a look at the Red Sox. It's an hour-long look at the Sox and their upcoming season, with interviews with the players and coaches. It will air at 8 PM and 11 PM on Friday night, and will be repeated on Saturday morning at 8 AM and 10 AM.
Posted by The Omnipotent Q at 11:53 AM

Harvey Keitel is my fave in that show. He is so tremendously slimy.

OMG, Q. You won't believe the word verification: coxcomb. I am at a loss for anything useful to say.

Coxcomb, eh, Suldog? I have a road to go down with that but I generally like to keep it clean here.

"Life on Mars" has a great cast and I really like Michael Imperioli's character too. He plays the neanderthal male chauvinist to perfection.

Granted Gene Hunt played by Phillip Glenister is a classic. So mean, so tough, we grew to love him. Some of Hunt's insults are classics.

The American "LOM" is very faithful. Keitel and Imperoli are perfect castings. Those guys are nasty neanderthals, but they are not played as put downs or for laughs. Gene Hunt is played as a person-and that is where "Life on Mars" succeeds. We feel empathy for Hunt.

About the MLB show, I'm settng my DVR right now. I never would have known about this...for that, I thank you, SO much john. I have something Sox to look forward to on Saturday morning.

Glad I was able to help, Peter...Thanks for your insights, Steel. Haven't seen the English version of the show. When is it on BBC America?

Sadly "LOM" was last seen on BBC America a year-18 months ago. Perhaps available on region 2 DVD. It lasted 16 episodes. I saw it last October the second season as a marathon.

Thanks for the info, Steel. I'll see if Netflix has it.