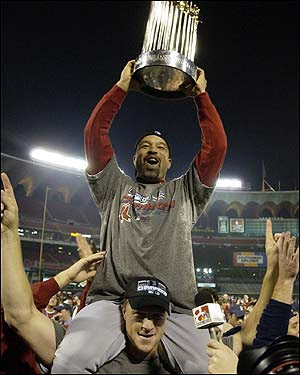 It will be an interesting night at Fenway Park tonight, as we'll see both ends of the spectrum from the Fenway Faithful.

Dave Roberts makes his first appearance at Fenway Park in an opposition uniform, and his first time back since the 2004 World Series ring ceremony. (The picture seen here is one of my favorites. Dave being carried on Mike Timlin's shoulders while carrying the championship trophy around Busch Stadium. It still gives me chills.) Dave is another one of baseball's better citizens, and I really hope he enjoys the well-deserved thunderous ovation that will be coming his way.

Then on the other side of the fence, Barry Bonds makes his first appearance ever at a game in Boston, the city he labeled "racist" and place he said he never wanted to play in back in 2004, when the Giants played the Sox in San Francisco. (Even though he never once stepped foot inside the city limits.)

He'll get the reception he deserves. I've talked plenty about baseball's least-liked player, so I won't rehash it all. Needless to say, it won't be pretty, and the banners in the stands should be fascinating to read.

What an incredible contrast. Thanks for the memories, Mr. Roberts.

If we ever get a chance to meet, the drinks will always be on me.
Posted by The Omnipotent Q at 1:32 PM

Great moment last night! And a great night for Tavie, JD and Peds.