Manny & Judas Land In The Same Place On The Same Day 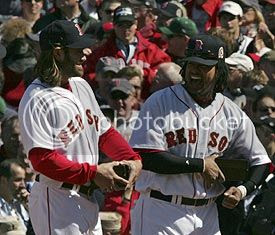 And that spot is: St. Petersburg, Florida.

The Tampa Bay Rays have reportedly signed not One but Two of the 25 from 2004 on Friday: Manny Ramirez and Johnny Damon. Damon will be signed to a one-year deal worth $5.25 million, and Ramirez will also sign for one year at just $2 million.

Of course, both are clients of Dr. Evil himself, Scott Boras. With Manny getting just a $2 million deal, that tells me there was absolutely no market for him at all. Red Sox fans will see plenty of them both next season, and it will be interesting to see the reaction Damon gets in Boston this April, after spurning a possible Fenway return last August.

Left field is open in Tampa (where did their last left fielder go to again?), as well as designated hitter. Both will probably see time in both spots there, although Ramirez' days in the outfield are pretty much a thing of past now. It's not a bad gamble for the Rays, as they are paying just over $7 million for both players combined and for just one year. Might work out, might not. We'll see.

More from Rob Bradford.
Posted by The Omnipotent Q at 8:43 PM