Putting a Wrap On The Week 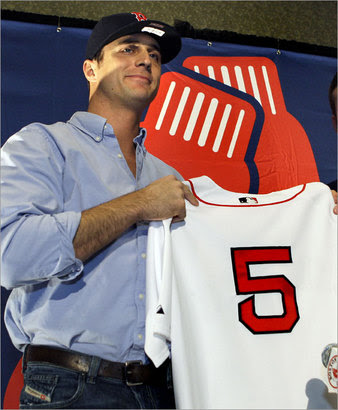 As more snow fell here in the East and my prayers for more and more warmer temperatures seem to go unanswered, here are some odds and ends from the week about to conclude.

Sorry to hear that Rocco Baldelli (pictured) has now officially called it a career, after just seven years. He looked like a big time player when he first came up with the Rays in 2003. He finished third in the Rookie of the Year balloting, and comparisons were made to him and Joe DiMaggio. (Really because he's also of Italian descent and wore number 5.)

But a bout with a rare condition called channelopathy, which caused Baldelli muscle fatigue, short-circuited his career in 2007. He played with the Red Sox in 2009, a homecoming for him, as he grew up a Sox fan in Rhode Island. He returned to Tampa Bay in 2010 for ten games, but now at 29, Baldelli has finally ended his once-promising career and will work in the Rays front office.

Rocco's a classy guy and I wish him all the best.

The Hauls of Shame web site has an interesting article about baseball pioneer Al Reach and the search for a missing photograph of him from the New York Public Library's collection.

Our old friend Nomar Garciaparra will be on TV more and more now, as he has landed the prime gig at ESPN as the color analyst on their Wednesday Night Baseball broadcasts. He joins Red Sox radio man Dave O'Brien, who is doing play-by-play, on those telecasts.

Did you hear that the Florida Marlins are moving their interleague series with the Seattle Mariners to Seattle this June because of a U2 concert that same weekend at Sun Life Stadium? Yep, they were kicked out of their own ballpark by a rock band! Pretty pathetic, and I agree with Tony Lee's NESN article that interleague play should be scaled back. Actually, I'm in favor of getting rid of it, but that's a story for another time.

As I write this, Truck Day is just nine days away. Can't come soon enough for me.
Posted by The Omnipotent Q at 12:19 PM