Would Mr. Moneyball Have Brought The Sox More Titles? 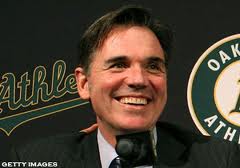 My friend Dan sent me an interesting email yesterday. He's as big a Red Sox fan as I am, and he was at a conference attended by Oakland A's general manager Billy Beane.

The man who was the inspiration for "Moneyball" was a keynote speaker, and Dan picks it up from there:

I was fortunate enough to be able to ask him a question (in front of the 800 attendees) and before my question about his stadium, I prefaced my question by stating I was a Red Sox fan and that I had friends that think of him as one of the most important people in Red Sox history in that if he hadn't turned them down they may not have won two championships to which he quickly retorted that I was right, because he would have won 4 by now, and jokingly stated that no matter what he would have the franchise in better shape this year.

Was a fun moment.

Would the Red Sox have four championships since 2003 had Billy Beane taken the reins of the Red Sox as GM?  It's an interesting thing to think about, but of course, there's no way to know for sure if that would have happened. Billy Beane still hasn't won his first title in Oakland yet.

Beane was set to become GM after the 2002 season, but backed out because of family factors, and Theo Epstein got the job instead.

Epstein left a decidedly mixed legacy in Boston. A lot of great things, but he also left the club a mess as well. Would the collapse of September 2011 have happened under Beane's watch? Again, we'll never know for sure.

I don't want to sound like a Yankee fan, saying things like "we should have won more titles." The Sox have two championships since 2004, and I am grateful for that. We went a long time waiting for that elusive championship that finally arrived in spectacular fashion in 2004. 2007 was wonderful, too. But a good majority of baseball fans in America don't see their team win one, left alone two titles, in their lifetimes.

However, I really believe that Bobby Valentine wouldn't have come anywhere near the Red Sox manager's office had Mr. Moneyball been at the controls.
Posted by The Omnipotent Q at 11:36 AM